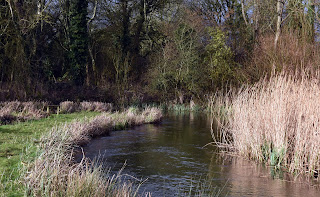 Well what a windy weekend that was.

Nothing to do with the high pulse count that we currently maintain in order to keep our bowels spick and span, but a storm with a name that I have seen spelt at least three different ways in a matter of days. Fortunately the next storm to sweep in from the west has been assigned the moniker “Dennis” which may be a little less confusing for the spelling departments.

For fifteen minutes on Sunday the rain was reminiscent of Niagara. A wall of water so intense we lost sight of the mill house across the road and many trees fell over,

all thanks to Rita's sis - Storm Kia-ora 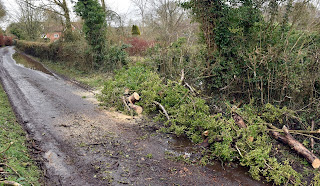 The wind blew all day and five o’clock in the evening found me attending to a sycamore in fading light with wine on board, that had toppled into the lane.


Around a dozen other trees joined in this arboreal Hari Kari, or "Tree Fail" as our Antipodean friends would have it 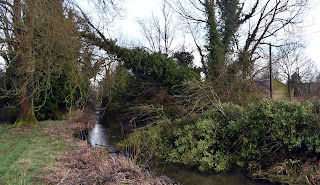 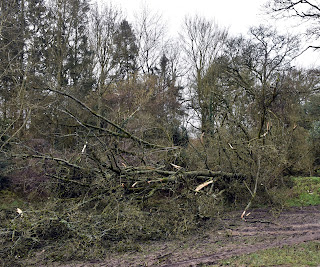 a large Field Maple fell out of the wood at the bottom of the Andyke, 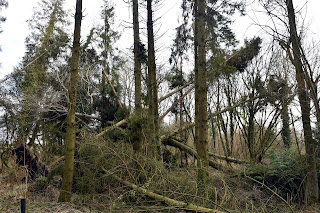 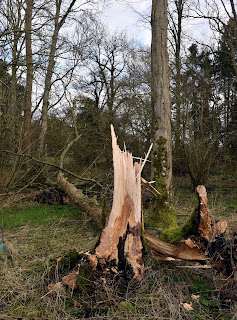 and three large ash trees infected with die back broke off at the base.

With my tree triage hat on, the sycamore on the road is a priority followed by the two ash trees in the mill stream and the field maple across the track at the bottom of the Andyke. 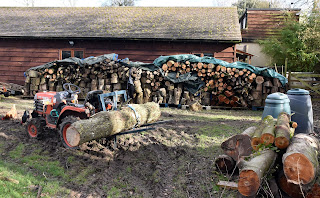 A length of the field maple has made passage from the Andyke to the plank processing pile, where it will season for some time before assuming another guise via the medium of chainsaw mill.

The Christmas trees and ash in the woods may have to wait for attention as the start of the trout fishing season is racing towards us and there are many tasks still to be completed. I also anticipate having to cut weed in April for the first time in a long time.

The luxuriant ranunculus is entirely due to a reasonable rate of flow. The Dever remains principally between its banks and it has been higher, but my goodness the rain we have received this winter has had a tremendously rejuvenating effect on the river. Ranunculus is stimulated by flow, gravel is scoured and cleaned by increased discharge, nutrient levels are diluted in the extra water. Rain is everything to this river and its aquifers, the contrast between the low levels of the last six or so years is stark. With a decent recharge of the aquifers summer fishing should be a very different experience this year with wellies the footwear of first choice. 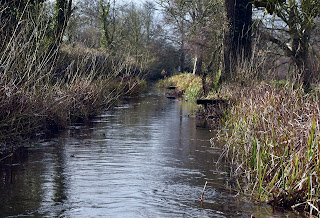 There may even be fish caught from the mill stream for the first time in many years. It’s one of the few places I have seen redds this winter and there should be water flowing throughout its length for much of the summer.

It has been as still as a pond for the last six summers and was built to drive the wheel at the mill. Bread would be plentiful this summer if the wheel were still turning and grinding grain. 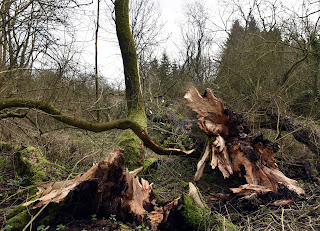 Before storm Kia-ora arrived Madam, myself and the dogs headed for the upper Itchen to undertake some left foot, right foot in further efforts to extend life.

It’s a walk we’ve completed several times and it crosses the valley floor on numerous occasions. 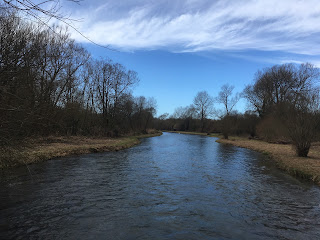 There wasn't much water lying in the meadows and the main river was impeccably behaved and squeezed snugly between her banks.

On the short stretch of the Itchen that I fall in and out of, the gravel bank at the back end of the pool that has been proud of the water for much of last year is now submerged. I’ve been laying waste to some bramble and thorn and I bear substantial scars on any flesh that became exposed. The ranunculus in this stretch of the Itchen is a little behind the Dever and may not need cutting in April, the ribbon weed however will need attending to once a month throughout the summer. 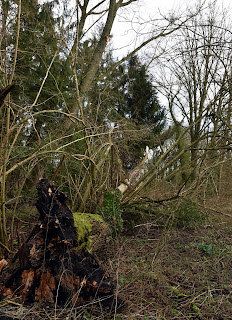 A brace of great egret have rocked up on the water meadow above here.

Little egret are numerous in number in this valley, but great egret are a reasonably rare visitor.

The few times that I have seen great egret here, there have been heron nearby trying to run them out of town. The two species don’t seem to get on and this pair were being watched carefully by three of Jack Ern’s best.

I don’t know if referring to a heron as “Jack Ern” is a Hampshire thing.

Mary Gunn who lived downstream next door always called them that, although it may have been a Mary Gunn thing. She was a one off was Mary.

Great Egret by the way, couldn’t be anything else, even to these failing eyes. Twice the size of Little Egret and a little bit more between the ears. 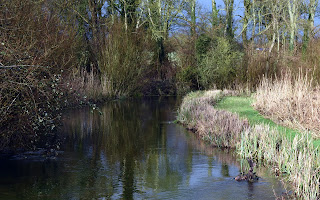 While we’re on ears, I am now trialling a brace of solid gold trumpets that speak to each other through the centre of my head.


Decibels harvested in the bad ear are transported by sound pixies across my bonce to the good ear which then assesses them on the bad ear’s behalf – I think that’s what she said. Reading between the lines my good ear is now bionic, or possibly functioning as a super ear.

I've been on to Marvel comics to pitch a new feature "The addled adventures of Super Ear Man" and a pattern has been commissioned for the costume.

I await their reply.

Anyway, I’ve bought cars for less than the purchase price, and it’s a bit odd when you scratch one ear and you hear it in the other, but it seems to help.

A Dickens of a show and a parody of our times.

that means a lot, especially from you.