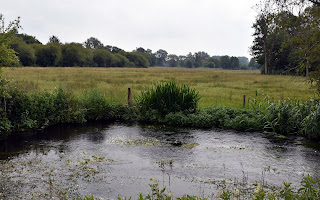 Right, despite the best efforts of “Our Great Leader” and his cabal of clowns, (selected for their Cummings compliancy rating, there are more capable coves in the house) I’ll do my best to keep this one light.

No coughing here by the way, and we do take our temperature each day on the morn with graphs subsequently produced.

For the first time in many years hatches of mayfly have been disappointing. We have seen no significant hatch, dance or fall of spent. It is the same story on much of the river, with the Upper Itchen the only exception. Not sure as to the reason why. There will always be a downstream displacement of mayfly nymphs in times of high winter flow, but every Ephemera Danica that was washed downstream would be replaced by one from upstream. A brief shuffle in the gravel with a fine mesh net to sample invertebrates betrays numbers of mayfly nymphs and much more besides. A Mayfly can run on a one year or a two year contract on the bed of the river, although I’m not sure what triggers the critter to sign for the two year option. The odd yellow sally is now putting in an appearance. A portent of the end of the mayfly season for another year. 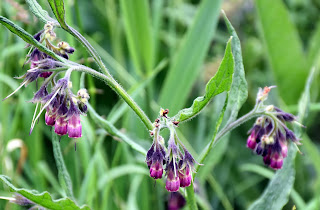 We’ve a few sedge about and a host of daddies regularly bumble about our kitchen. There are olives, caenis and a burgeoning number of odd moths. 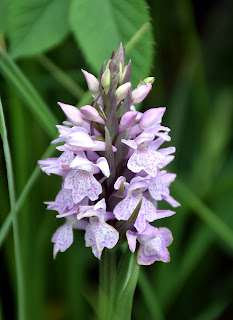 The first marsh orchids are out and there are several broods of mallard about the place. The river retains the sparkle that is only imparted by a good scrub behind the ears from increased winter flow and weed is having a high old time of it. 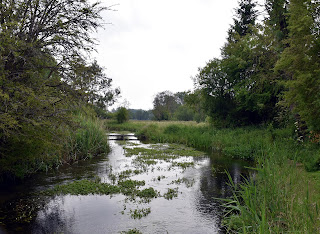 This week saw the start of the June weed cut. Traditionally the heaviest cut of the year, last year, following a dry winter it was done and dusted in a matter of hours. This year will see me swishing a scythe for seven or eight days, with much clearing down of cut weed as the verdant weed growth extends for several miles upstream. Over on the short stretch of the Itchen that I fall in and out of the ribbon weed has been quick to put in an appearance but the ranunculus is a long way off flowering. The water has fined down considerably and while engaging the forces of ribbon weed via the medium of turk scythe I was entertained by a dozen or so swallows picking off olives hatching from the bridge pool, a few feet away from my head. I’ll own that despite these dodgy eyes I did duck several times which may have caused several walkers crossing the bridge to titter. 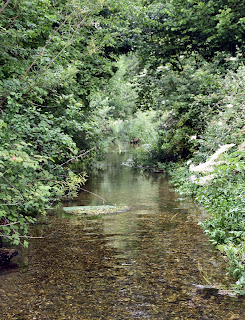 It has been a little disturbing to see the reports of “fish rescues” by the EA on The Angling Trust twitter feed. We seem to have got through an awful lot of that water that was around in February. We will not have enough water to run the Mill Stream in a week or so and weed has been cut with an eye to retaining water level. Not something I envisaged when I was cutting weed in April. 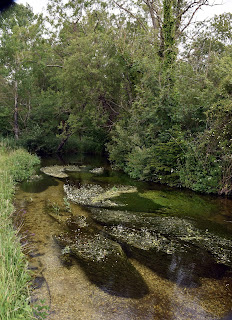 In other news, Child A turned twenty seven this week.

I don’t know how this happened.

Someone has fiddled with time.

Twenty seven years ago, on the opening day of the June weed cut I returned home from cutting weed on the top shallows to be informed that sandwiches were off, water had broken and we must make haste for Winchester County Hospital. It was a long process, but Child A eventually put in an appearance around lunch time the next day, perfectly healthy, if a little grey. Child A was given the moniker Maisie because it was still Mayfly time and Madam railed against my suggestion of Danica or Ephemera, a compromise was reached with Maisie. Child B’s launch followed a similar process. Born in January I initially suggested “Snowdrop”, with “Aconite” as a backup/middle name.

Both suggestions were dismissed out of hand by Madam. 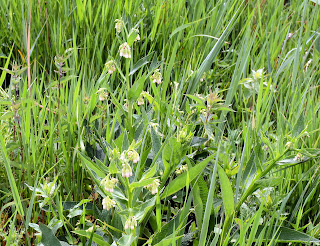 Brief consideration was given to the name “Dangerous” as I felt doors would open later in life for someone called “Dangerous de Cani”, but once again I was overruled and he assumed the moniker “William” a week or so later. For the first fortnight of his life William was known only as “baby”. After a fortnight of tired Dirty Dancing references regarding his cot being placed in the corner of the room a suitable name was found. 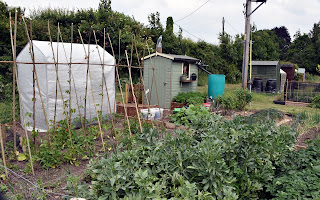 In allotment news, we consume broad beans with gusto and there are four pound of the things frozen in the freezer. Rhubarb continues to thrive, runner beans display flowers and soon we will be digging potatoes. Onions are average, as are leeks and the crows plucked out half of my sweetcorn. Tomatoes, both plum and cherry, thrive and monster parsnips lurk in the corner, ready for harvest once they’ve had a frost on them. There’s a medium size ash tree on the bank of the spring ditch that carries water from the field known across the ages as spring bottom. It’s dry now, but I shan’t go on.

Anyway, the medium size ash tree is around thirty feet high and on several occasions that I have haunted the place in the name of weed removal the Merlin has perched in it’s upper branches. I’ve yet to get a photograph, and I’m not sure, but the frustrated falcon may have gone spooney over the plastic predator that sits on top of my shed. 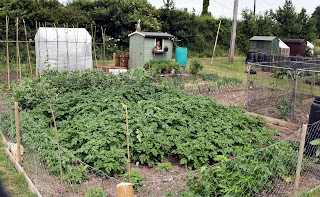 Veterans readers of this chunk of guff will note the Duchess of Cambridge remains captive in the shed. With a nod to the lockdown she has eschewed hair cuts and is growing her mane in order to let down her hair and allow the Duke of Cambridge, a little fella to climb her locks to profess his undying love for her. I will then have a brace of Cambridge captive with which to scare the pigeons and crows.

That’s the tale I tell my fellow allotmenteers, who seem to give my plot an increasingly wide berth.

Chris, if you are an allotmeteer you have to be a little cranky. In Sandhurst I was so cranky that I became 'chair thingy' of the allotment society/club. Perhaps stupid is a better word having to deal with that crew. You crack on and do your thing even if it is only destabilising Merlin but don't cross him. A flash and a bang and you're a mayfly nymph. Stay safe and sane. ATB, John

Welcome to the "new sane"

We don't have an allotment commitee/ society or commune. It is very much every man for himsel, and If I've got a glut of broad beans and yours have failed well "piss on the fire Jack, my tea's made"

Look after yourselves and thanks, as ever, for getting in touch,

Thanks for getting in touch and I am sorry to hear about Anderson. I know it's difficult, but in such sad times I find it helps to look up and not down.

I am all too aware that the spelling in this poorly written guff can all to often go a little awry. Wine has often been taken and thank you for not picking me up on the grammar. Spelling has long been a blind spot for me and thank you for reminding me how both my personal and professional/semi professional life could be improved if I paid more attention to spelling.

Thanks again for getting in touch and really sorry about Anderson,

Get A Blank ATM CARD And Cash Good Money/Funds Pay Your Debt directly today in any ATM machine around you anywhere in the world. contact cryptoatmhacker@gmail.com.. It's 100% guaranteed secure with no worries of being caught because the blank card it's already programmed and loaded with good funds in it, in such a way that's not traceable which also have a technique that makes it impossible for the CCTV to detect you, i am not a stupid man that i will come out to the public and start saying what someone have not done. For more info contact Mr john and also on how you are going to get your Card, Order yours today via Email: cryptoatmhacker@gmail.com

Thanks for getting in touch and for reading the rubbish that I write,

Pitch back a few pages in this chunk of guff and you'll find that I was scammed just over a year ago when booking a houseboat in Amsterdam. It wasn't a pleasant experience and I'll own that I was briefly shaken,

Through the worst of it I can now. invite you and your type to introduce their genitalia to a coffee grinder and press play.

You may not be, as you describe " a stupid person" but in under two hundred words you have demonstratd you are more than a bit of a twat.

I'd recommend the Bodum coffee grinder for your initial course of treatment, and as an alternative source of online reading material, try