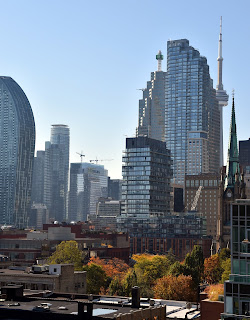 Apologies but it was half term last week and with a nod to living for pleasure alone, we’ve been away again.

This time on entering the changing room on 52 Festive Rd we were transported to the shores of Lake Ontario in Toronto. 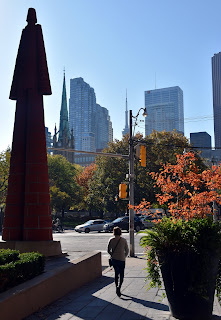 Madam had visited Canadia before. Three months in Alberta not long after we first hooked up. She fell ill the day she was due to depart, flying home 24 hours after her visa expired unsure as to whether she had been listed as deported.

Which added a certain frisson to the immigration process at Pearson airport thirty years later. 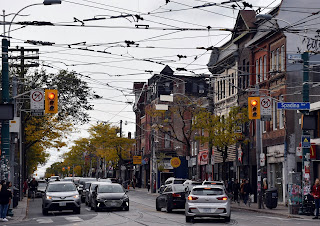 Pulled aside by the people with the rubber gloves and the clever dogs with sensitive noses, we feared the worst.

Ok we had the required visas and, at fifty one years old, we appeared fairly benign, but why had sir declared on the immigration form that he was entering the country with a pocket full of pot?

I explained that my peepers were pretty poor, the digital machine that was asking us questions had been very confusing and pot was not really our bag.

Suitably appeased we were waved through,

And so it was that a packet of Tesco finest chipolatas was smuggled into Canadia to provide succour to our aching bellies should airline provender have proved inadequate after our evening arrival.

Concealed within several pairs of ripe old underpants the keenest noses of the Canadia's premier sniffer dogs were even put off the trail.

Airline provender proved more than adequate (a very good curry) so like good goobers (after Bill Hicks) we fixed sausage for breakfast the next morning in our one bedroom condo in down town Toronto before breaking trail. 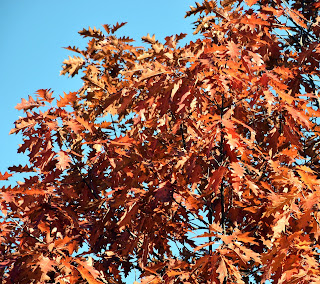 Prior to our visit I had consulted at length with Kevin from Canada regarding The Fall.

Kevin had predicted 95% Fall during our stay which to my addled eye proved pretty accurate. 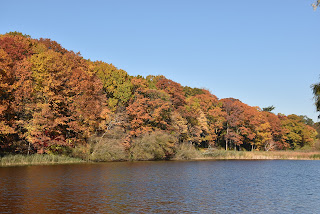 Thirty minutes on the Metro way out west pitched us into High Park where all sorts of maples and oaks were giving of their best in the bright sunshine. 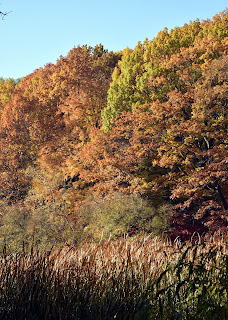 The lake in High Park was lined with explanatory boards highlighting the need to control the Phragmites as, if left unchecked, it would conquer the large shallow lake. 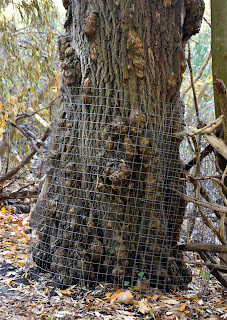 Most substantial trees lining the lakeside were also fitted with guards to prevent Beavers dropping the things into the lake as is there wont. 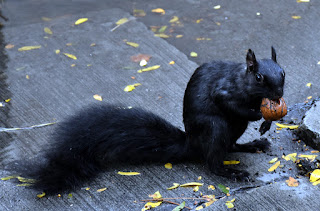 Toronto by the way, is riddled with tame black squirrels, both out in the burbs and downtown. 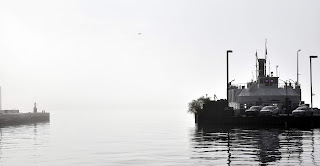 Out to the islands the following day. 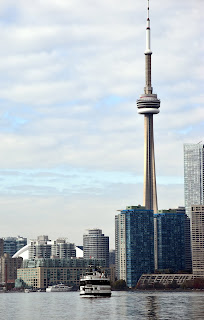 A small archipelago a fifteen minute ferry ride out into Lake Ontario from the Toronto waterfront.

There was a funny feel about the place as everything had shut up the week before for winter. 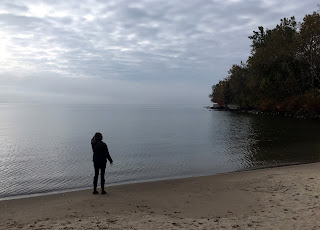 There are many marinas, a small zoo an amusement park, sandy beaches and many boardwalks perfect for walking and cycling. 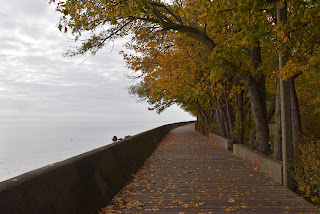 The island plays host to Coyotes and Racoons and features many explanatory boards listing the species of fish that inhabit the lakes. 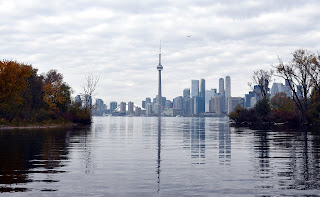 We didn’t see any fish during our brief visit nor much insect life which was a bit disappointing but vindicated my decision to leave the rods at home this trip.

Back in Toronto we punished the ribs and wings and local lager before heading down to the Scotiabank Arena to take in an NHL game. 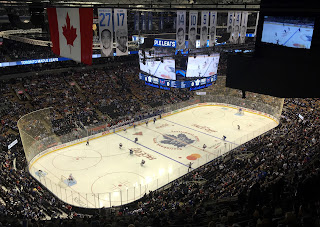 The Toronto Maple Leafs were taking on the Washington Capitols in front of a twenty odd thousand partisan crowd.

Madam has previous history with all things NHL, Wayne Gretzky and the Edmonton Oilers from her trip thirty years ago; she even met the great man at the airport on her opening gambit to make her way back to Blighty.

This was my first experience of live ice hockey and I’ll own that I couldn’t quite keep up with comings and goings various, although this may have had something to do with the local lager. The Leafs (I know, I know) lost by a golden goal in extra time, which seemed a little harsh as they only had three skaters on the ice at the time.

Off out to Niagara Falls the next day. Something that I have wanted to see since I read about it in a ladybird book at primary school age. 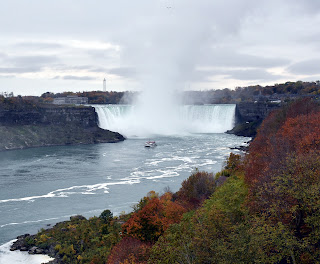 It's a bit of a faff to get out to the falls at this time of the year.

An hour on the train and an hour and a bit on a bus followed by a forty-minute walk from the bus station, but it was well worth the effort.

The falls are surrounded by explanatory boards with pictures of tightrope walkers, lunatics in barrels and a barge hung up on some rocks a few feet from the lip of the falls. 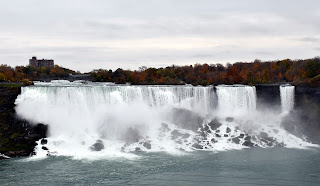 I was aware of the substantial hydro electric scheme that lights millions of light bulbs in the region, but I was unaware as to how controlled the amount of water going down river is.

A clever man with buttons that light up, sends water this way and that dependant upon digital information received.

There's no putting boards in and out of sluices here, but the principles remain the same, just increased exponentially along with the associated risks.

There is a fixed amount of water sent over the horseshoe falls that is reduced at night to make more ohms and amps. I tried to convert the amount of water going over the falls to mgd (million gallons per day) but I'll refrain from listing it here as I may well wear out the zero button on my new computer. 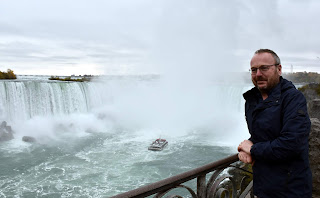 If you are into Eau, it’s a remarkable sight/site, and one that I will remember for a long time.

I’m just relieved I am not required to don the chest waders and swish a scythe a few yards downstream from the falls. 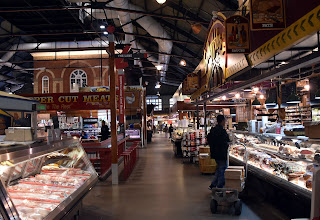 The following day it rained from dawn til dusk, so we ambled about St Lawrence Market and then visited The Art Gallery of Ontario.

St Lawrence market is a festival of food and fine fayre and an easy place to spend a couple of hours. Cold smoked beef and Pastel de nata were two highlights along with some damned odd sausage. The quality of the coffee is a given, and at this point it may be apposite to mention Tim Horton.

An ex hockey player he has coffee emporia right across town, and goodness it’s good coffee. Tim did well out of us during our stay, double espresso for me and a couple of Tim Bits for Madam several times a day. 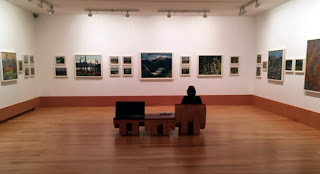 The Art Gallery of Ontario is worth a visit.


Alongside an interesting collection of indigenous art sits a large collection of Henry Moore blobs and plenty of other twentieth century stuff that we both much favour,

and a touring collection of Peter Paul Rubens.

I like his fleshy forms that have influenced works by Lucian Freud and Francis Bacon, but some of his biblical stuff, commissioned to strike fear, leave me cold. 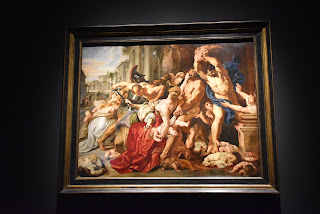 Star of this particular show was Massacre of the Innocents, a picture that I can only suffer for a brief period of time.

On a lighter note, the gallery also has a collection of works by the “Group of Seven”

Among Canada’s most famous artists they have a unique appreciation of the Canadian Landscape.

We were both much taken with the work of Arthur Lismer, a new one on us but an artist we will look out for in the future - give him a google.

They are way ahead in Canada when it comes to paper craft and while Madam perused the inks, stamps and dies of yet another craft store, I headed for a bar where I had been swiftly accepted as a new fly. 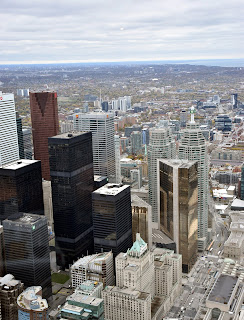 On our penultimate day in Toronto we headed up the CN Tower for lunch.

I am not great with heights.

Until 2007 the CN tower was the tallest free standing structure in the world. It now sits 9th in the table. The revolving restaurant sits around 1100 ft up this 1853ft high pile of bricks. 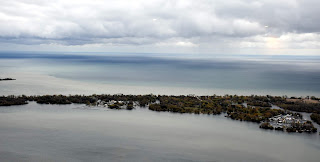 Why we booked a table, I don’t know, I thought we had attained an age where impulsiveness had passed.

A stiff drink was taken and we entered the glass bottomed lift along with the front row of a baptist choir who were on a girls weekend away.

Madam and myself were separated and as a conversation opener to the loose head of the front row of the choir who I was squeezed up against, I mentioned that I didn’t like heights or glass bottomed lifts.

She confessed that she wasn’t too keen on heights or lifts either, and in a Trevor Howard, Celia Johnson moment we held hands throughout the sixty second ascent before parting company at the opening of the lift doors.

Food taken high up in the air on a precarious pile of bricks was surprisingly good. Canadian steak, Canadian wine and tremendous Canadian Hospitality. Our lunch lasted two spins of the tower pod and afforded stunning views of the city and lake beyond.

The excellent Canadian wine instilled an air of insouciance on our minute long lift descent to the sidewalk,

as if by magic,

Fabricio, the Brazilian airport transfer man (sans fez) appeared outside our apartment block with an explanatory board indicating that it was time to make our way back to 52 Festive Rd.

Apologies as ever for more travel stuff, but I do have to write something down else it all fades away.

Many thanks as ever to family for filling in at home.


An interesting read wr. I had a moment of panic in Chicago withitten by a chippolata smuggler, presumably the Dever Cartel is expanding. I don't like glass bottomed lifts or floors high up in the air, we were in Chicago up a mighty tower and I froze when I looked down and couldn't move. Sue thought she was going to have to get Chicago Fire to talk me off it. Probably an ulterior motive there. You must be happy with the rundown in Hampshire, it's been chucking it down in West Norfolk with most of the landscape stuck to the 'pike-mobile'. Spring Bottom? All the best, John