An Ovine Experience, Toilet Fowl and The Future of Demarcation 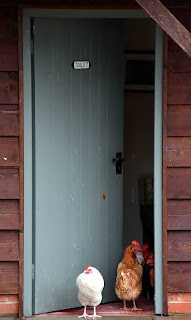 A tricky trout season is on the cusp of termination.

It’ll be one that will live long in the memory and one, that earlier in the year, we did not think would happen,

But happen it has, which is a blessing despite poor hatches of fly and a dearth of free rising fish.

By way of distraction, here’s one of the chickens exiting the fishing loo,


The rear guard of the swallows and martins are making preparation for departure and concentrate their efforts of a final feed around the hedges and the fields rather than the river. Plenty of duck currently roost on the pond. Mostly mallard with a few gadwall intermingling. Hides are ready for evening flighting and the phragmites is dying off which will aid picking up dead duck in the dark, something that Otis was particularly adept at, although the task may a bit much for him now at such a great age. Moss is too obsessed with horse racing and shows little interest in picking up the corpses of quackers.
Trout are not yet making preparation for spawning. Some seasons saw fish in September getting territorial as hormones kicked in, but not this year, but then there are far fewer cock fish in the river than there were ten years ago. 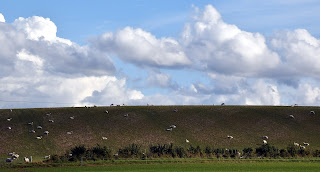 Here’s one of some sheep in the fields behind our house.


Well yes, Chris, they are sheep alright but what’s your point, I hear you say. 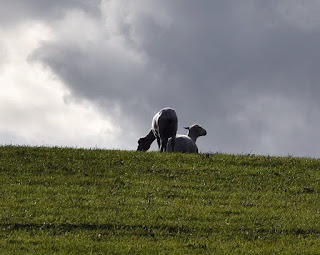 These fields have not played host to any form of livestock, bovine, ovine or porcine, in my time falling in and out of this river. Thirty five years ago, pigs briefly put in an appearance and in the fifties and sixties cattle were present on much smaller fields of pasture that also provided a bounty of grey partridge.

The field is now a hundred acre affair and remains quite a grown up partridge drive although principally of the French variety and not the indigenous grey.


It appears that shooting has been scaled back significantly.

The process of planning for a winter of shooting begins in March with pens prepared for hens to lay eggs for artificial incubation. My mind’s been a bit numb for few months and memory sometimes doesn’t serve, but I think something happened in March.

Shooting may well be a bit different this winter.

I was kindly invited up to Scotland for a few days bothering salmon on the Tay.

Speeding through areas in the grip of lockdown with the blower off and windows steamed up, it was a self catering affair near Caputh.

I’ve been lucky enough to fish the beat a few times before and on each occasion I've been struck by the size of the river. Not quite the Loire, but big for Britain.

The fishing includes the stretch where Georgina Ballantine hooked and landed the largest freshwater fish ever caught in Great Britain. 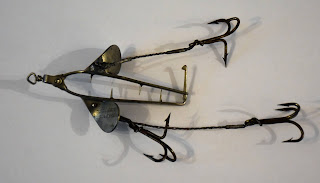 Hooked behind the “Bargie Stone” in fading light on a two inch dace presented on a Malloch spinning mount, it took over two hours to land and weighed sixty four pounds, she had already caught three fish over twenty pounds earlier in the day. 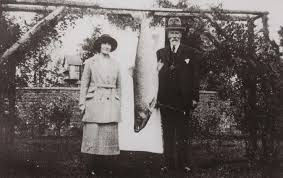 Salmon fishing was a little different back in the day. 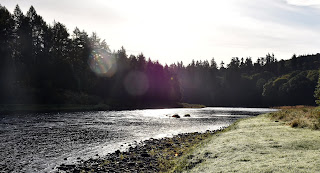 Miss Ballantine had a long association with the medical profession and had been decorated in the first world war for her work with the Red Cross in France.

After a plaster cast had been taken of the fish by way of record across the ages, the leviathan was donated to Perth hospital where all incumbents dined on salmon for over a week.

The cottage that she lived in sits by the bridge at Caputh. Riddled with arthritis at a young age she had both legs amputated. A popular member of village society, locals rallied around to look after her. A light was even fitted to the top of her cottage should she be in distress and require assistance.

My own thrashings behind the Bargie stone produced no reward,

although I did lose a fish on the first day having had it on for a few minutes.

Nicely alight and with a few glasses on board, I'll insist that it would have pushed Miss Ballantine’s fish close in size,

but in the cool light of dawn it was probably ten percent of the weight of her huge salmon.

Back in Bransbury, it’s nearly hedge cutting time, at which point I would like to make my perennial pitch for the future of demarcation to centre around brick walls and fences. Trees to follow, with the mother of all aspen to attend to and the inevitable dead ash and there is a bridge that needs rejigging in the wood. Grayling anglers are making enquiries and we’ve had our first frost which has brought our bumper bean crop to a close, much to Madam’s delight. 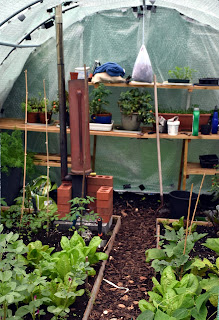 Little does she know that I now have an insulated poly tunnel. Replete with rocket wood burner with the mother of all post bumpers filled with water stood atop by way of a radiator. It's the post bumper that bumped me on the bonce earlier this year earning me a blue light trip to the infirmary (it's on here somewhere) so the thing owes me one
(it 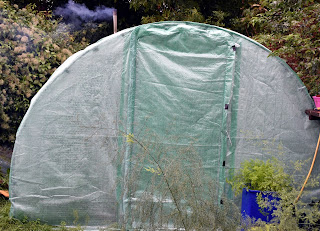 The aim is to produce further produce throughout the winter months to see us through the promised shortages next year.

Sheep have appeared in fenland too, but I think they graze finished crops back while fertilising the land. A sensible tactic by the farmer. You've had frost, I'm impressed, I don't think we'll see many this winter. Ah grayling now there's a beautiful fish. All we have to crop are more plum tomatoes and Jerusalem Artichokes, the soup will break the ice at select gatherings. Good job we'll all be socially distanced. Stay safe, John