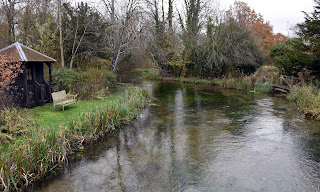 Ave all.
Here we go again.
Last week the wind blew the rain fell and several arboreal leviathans toppled to the ground. All in the wood, two of them ash that had been on the cusp of cashing in their chips for a few summers, the third a golden willow that had been dead for a while. The first ash we chopped up provided four pallets of logs. 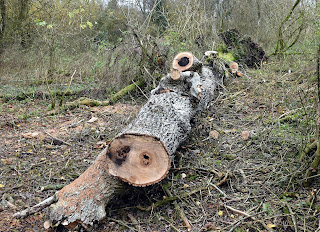 The trunk was a little too big for the 28in Husqi and will lie in state in the wood, providing habitat for all manner of bugs beasties and funghi. We are encouraged to be a little less tidy in our management of woods water and gardens in order to promote biodiversity. 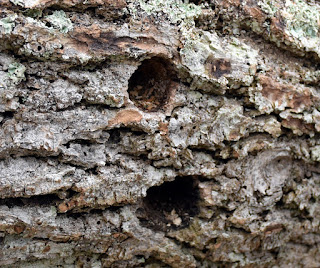 This arboreal leviathan had been a popular stopping off point for woodpeckers, and a bunch of bees had taken up residence in a hole half way up the main trunk. 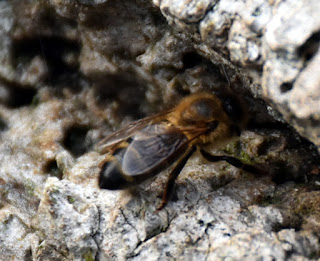 Not very good at identifying bees and who knew there were over two hundred and fifty varieties in the UK alone. They looked and behaved similarly to the mason bees that enjoy the thatch on the cricket pavilion, although the abdomen may be a little darker. 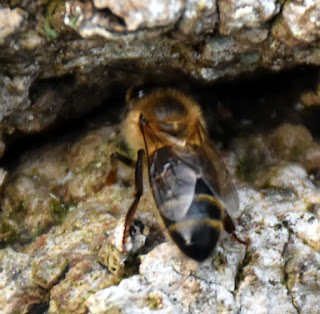 They didn’t seem too bothered by the chainsaw disturbance and went about their business on the three days it took to deal with the tree. 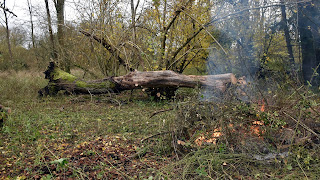 The large golden willow trunk has also been left to the bugs and beasties. 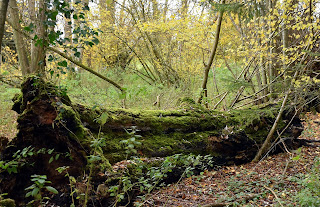 This substantial ash fell over fifteen years ago and continues to play host to all manner of life, decomposers mostly slowly returning it to the earth. 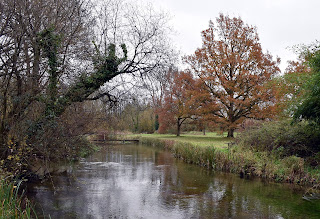 The rain has been hard, heavy and provided a welcome early winter fillip to the river. The hatch on the mill stream is already open (it remained closed from August 2013 to January 2019 due to low water) and the main river is carrying colour and close to being bank high. It doesn’t make for easy grayling fishing but a few are booked in to have a go as quite rightly, fishing with one other buddy is a permitted activity in these bizarre times. Today, on the way to deliver barley to the flight pond, I paused to question The English about his movements and my eye was drawn to a couple of dozen olives dancing above our heads. It had been a mild day and in clearer water they may well have drawn the eye of the grayling as they broke free of the water. 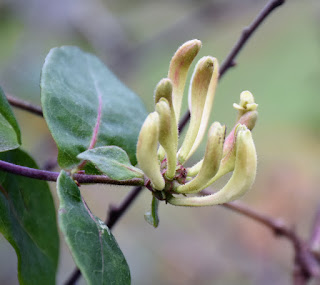 This honeysuckle in the hedge is clearly confused by the mild conditions and is throwing flowers again
There are plenty of duck about, mostly mallard but some widgeon are whistling their way up and down the valley in the evening. It couldn’t be anything else and it’s a bit of a surprise as, like teal, they don’t usually turn up until the weather gets very cold.
Strange times.
Buried deep in today’s edition of The Times is the news that flea treatments harm “river life” . The insecticide Fiprinol was detected in 98% of water samples taken with the average concentration five times the safe limit. The River Test was singled out as one of the worst affected rivers in England & Wales, The highest concentrations of Fiprinol, a nerve agent, were immediately downstream from water treatment works, suggesting that the Fiprinol is entering the river via domestic waste water following the washing of pets or their bedding. In tests high levels of Fiprinol have been shown to impact upon aquatic invertebrates and there are calls for Fiprinol to be banned.
Good news! approval has been granted for a tunnel beneath Stonehenge. 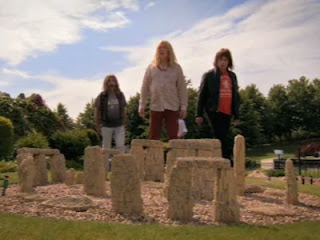 Two miles long it will begin at the Amesbury roundabout and end the other side of Winterbourne Stoke. The proposal has been mooted for over thirty five years. A bugger of a bottleneck, the dual carriageway drops from two lanes to one as it passes the stones. Any movements to the west during our time here, be it for business, sport or travel, have always had to factor in Stonehenge. The pressure put on the surrounding lanes and villages as people have a light bulb moment and head off piste is immense. 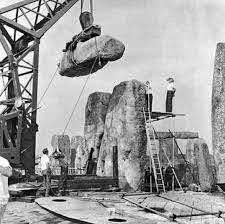 Why they built the thing so close to the road in the first place is beyond me, and at this point can we all remember that a lot of it was  taken down and moved around in the early 1900s.
Don’t get me wrong, it is a tremendous thing. The year that the farmer who has the field on the other side of the road built a replica henge out of straw bales increased the traffic further and I have visited in the middle of the night as a student drinking beer with mates sitting on stones trying to tune in to the vibe. 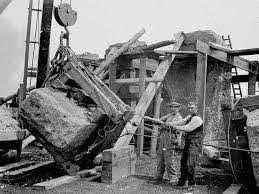 It could be done so much better and taking the traffic away and putting it underground will only enhance the piece. Great play will be made of the engineering miracle of the tunnel but Madam and myself have travelled through numerous tunnels in Europe of far greater length. Many times we have sat stuck in traffic near Solstice park trying to head west and one of us has sighed and muttered, “when are they going to dig that bloody tunnel???”
Just get on with it.
It will not come as a surprise to most visitors to this house that when at work my addled mind is not always on the job and prone to drift. Irked the other day by the internet and some dimbulb troll who thinks that because he/she is online, all filters are off and comments can be abusive, unkind, ill informed or just plain false
.

Which led me to ponder what would have happened if we’d just stuck to landlines, dial up internet connections and the post.
It took a bit of effort to make an abusive phone call, any unkind or abusive comments made on a dial up connection would have to pass through a period of buffering during which the red mist may recede, and I don’t member any abusive or unkind letters dropping through my post box. The internet and mobile connectivity have undoubtedly changed how we live our lives in a very short space of time, but, and I’m looking at you here Tim Berners-Lee, when the internet was invented and Tim first piped up with his initial “Ahem, attention everyone, I think I’ve got something” he could have added the rider “I’ve called it The Internet, it could be a tremendous thing……but it might not be for everyone”
In today’s ding dong news,
Ding Dong the Dom has gone!
Here's his ebullient cousin Lyle in The Simpsons.
A staged exit from the front door of No.10 with a cardboard box full of contempt for the common man and a mobile eye testing kit,
Classic Dom
Antagonist and Duper in Chief
He should have gone in April. Our own MP who does good things from the back benches said as much in her reply to an email I penned in mid April.
“ I have no doubt as to the immense damage the PM has done by refusing to sack Cummings.  He is seldom so out of step with public opinion, and I assume is hoping people have short memories.  It is awful.”
Posted by Test Valley River Keeper at 20:12


Chris, thanks for the latest monologue, the winds finished off a couple of Victoria Plum trees and that was it, while stands of poplars did their imitation of jet engines revving up as the wind ripped through the. Now all is quiet and had a frost this morning, a proper frost and the first of the winter. The drainage board have been pumping but the fishing for perch and large pike is plagued by Jack Pike, I've never known so many and there must hundreds. Presumably the result of a bumper spawning season a few years ago and they even like bread crust... It'll be vegan pike soon. Anyway stay safe and give us a film of the river soon please. ATB, John