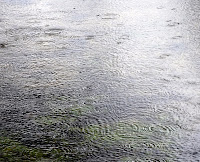 Two weeks to the new season, a wet week at last and more rain forecast for the next few days. It hasn’t done much to the river bar add a tinge of colour, and only one puddle has formed on the water meadows, the top layer of soil had turned to dust and has soaked up much of what has fallen. If groundwater flow into the river increases due to rainfall there is a time lag between the rain falling and the river rising. If spring fed rivers such as this creep up a few days after heavy rain the groundwater flow has increased. Weed growth is patchy, on the top shallows the ranunculus is luxuriant and close to the water’s surface, further downstream it is only just poking from the gravel. Over on the stretch of the Itchen, ribbon weed predominates and is already a foot long. No sign of any hawthorn yet, just olives and the odd sedge but there have been few rising fish in the pouring rain. Otters are about on both rivers and most mornings I have found fish dead on the bank. Half a Roach that would have topped two pound when complete, the end of an

eel and several trout that appeared to have overwintered well until that tinker Tarka took a fancy to them. I have replaced the batteries on the electric fences that surround our stew ponds but the fish in the river are easy picking in the low clear water and must take their chance. In two weeks there will be Fishermen tramping the banks that may move the Otter on but in the interim a few more fish will bite the dust.

The first swallows have turned up and appear a tad grumpy after their long journey if this photo is anything to go by. Four arrived to nest in the stables, feast on fly and perch on the cables that hum above our house, in a few weeks there will be many more along with house martins and a few swifts who nest in a gap in the gable of the mill house. The

cettis warbler has also returned and sounds the alarm anytime I approach the flight pond, and there are a couple of hen Pheasants on eggs in the christmas trees. I have also put up an owl box on a large ash next to the river. The old pig hospital a hundred yards up the road used to be home to a barn owl who hunted over the meadows at dusk. The building has been converted into a dwelling and the owl box erected in a neighbouring tree often has a cat asleep in it. The barn owl is still about, one evening last year my son and I were driving up the lane to football practice and he flew alongside us fifteen feet from the passenger window for about a hundred yards of our journey. Hopefully he will like the box, although a few owl boxes in the valley end up with mandarin duck nesting in them. Our own “tree duck” a mallard who nested in the crook of a tree five feet from the ground has hatched off nine chicks all of whom made it to the ground and onto the river.

On the short stretch of the Itchen on which I work, the trout fishing season begins next week. Unstocked and lightly fished it poses different challenges to the stretch of the Dever for which I am responsible. One particular factor holds true for both stretches of river, coils in the river bed. Here on the Dever, magic magnetic coils were installed in the river bed seventeen years ago at great expense to monitor discharge. These were deemed obsolete last year and replaced by an ultrasonic contraption. The discharge on the Dever could have been monitored manually daily by a man drawing a wage that attracted the top rate of income tax for sixteen years at half the cost of the installation. Anyway it transpires that the coils in the bed of the stretch of the Itchen that I work on are also obsolete and have been replaced by the wonders of ultrasound that fire signals back and forth across the river at fifteen minute intervals. Unfortunately the miracle of bankside ultra sound struggles with weed and silt. So a man in a life jacket replete with distress flares and kendall mint cake is employed to cut ten yards of weed once a month and another stands with a life preserving buoyancy aid, having first completed a one day course with lunch on how to throw the thing, should he fall over. The two are transported, along with their scythe, safely sheathed, to the river bank in a two year old 4x4 pantechnicon and their progress monitored from space. Why do we need such detailed flow data on the chalkstreams when they don’t flash flood? it seems an awful lot of time and money to spend on what must be one of the most uninteresting flood hydrographs around.

Away from the river it’s been a tad hectic. The BBC got in touch about an appearance on a show about the drought, it hasn’t stopped raining since so plans may have been put on the back burner, that or my regional accent wasn’t thick enough although it passed muster for a seminal performance in “Village voices” a few years ago when I mistakenly stated that I would do my job for free. Some while ago I was interviewed by Meridian TV for a local news piece on rural employment. The presenter and camera man were very chatty as we walked up the river, I jumped in and pretended to work, and “action” was called. The presenter came at me like Kent Brockman with his best TV voice which startled me somewhat although if Robert Peston had been the interviewer I would have assumed he was unwell.

I have just submitted my first 850 words for a fortnightly column in The Shooting Times, the photo isn’t too hot and I am a prime candidate for the airbrush not the hairbrush (hair, I remember hair) but it is quite an exciting and interesting opportunity to see how writing regularly for a magazine works.

Currently I sit under an umbrella in the pouring rain; an annual four day fishing trip to France for Dads and boys in pursuit of all fish Coarse. I cannot remember when I last experienced twenty four hours of rain as we just have and if we have room in the boot on return I shall bring as much back with me as I can. Like any fisher, bridges are a welcome diversion from an interminable journey a brief peep over a succession of parapets revealed the Somme, the Seine and the Sarthe well down from the last time we ventured this way. 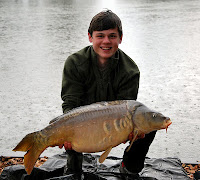 We are chasing Carp on this visit and four of us have laid siege to a lake twenty kilometres south of Le Mans. A “guilty pleasure” it is not the purest form of fishing but fun nonetheless, and a change from our usual pursuit of Chub and Barbel, very social with wine, bread and cheese to the fore and much mickey taking throughout. The water is chilly following snow last week and the fish are relatively inactive although we have managed to put three fish over twenty pounds on the bank.

We are surrounded by cows, one of which has been fitted with a bell along with another, who, deprived of a bell chooses to batter seven bells out of its tin shed. The two combine to form a tuneless Cow calypso with steel drums and bells that seems to go on for much of the day and night. They are two of fifty odd Charolais that have been overwintered outside and while the fields are a little torn up they are not the muddy morass that you would expect at the end of a typical winter. Before the rain there were a couple of cuckoos and each night we hear boar bumbling around a neighbouring wood. The trees that surround the lake are further on than at home` and the buds are breaking on an Oak that stands next to my swim. We often see our first Swallows and Martins on this trip but no sign of any yet, only a brace of Tern who carry out regular sorties of the lake.

Back home we have received countless pieces of advice in the post from all quarters on how to get through the coming season. Pretty straightforward stuff on maintaining levels and preserving what little water we have. If fish are to be rescued from anywhere on this river it will be interesting to see what stance is taken over the licensing of such movements or whether they will be allowed under special measures that will compromise the Biosecurity bumph that we have been bombarded with in recent years. I still have concerns over the fish in our stew ponds that are starting to look large and numerous in the small amount of water that is flowing through them. Weed growth in the river will help raise the level a little and send more water through the inlet pipe, but a couple of errant Swans running fast and loose through the bars of ranunculus could see the level drop back to its current level. Our abstraction licence is for a quarter of a million gallons a day which is all that will go through the pipe, I doubt whether we are currently getting half that.

"Marsh marigolds" are starting to show, the first few “Lady’s Smock” are up and out and it won’t be long before the Ramsens are in flower. No sign of any early Hawthorn here yet, the hedges are in full bloom but I did see several of the cumbersome black flies at 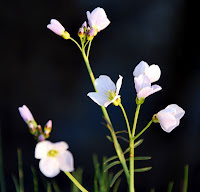 the Eurotunnel terminal in Calais. The odd sedge and a steady trickle of Olives from late morning to mid afternoon hold the interest of the Brown Trout several of whom look to the surface and after a brief break, a few Grayling are hard at it again in the shallows with around half a dozen males charging around after the arrival of the final few gravid females.

We have had a herd of Fallow Deer in the field behind our house for much of the past ten days, There are fifteen of them, which is the most I have ever seen over this way although there are numbers a few miles north of here. They may have moved into this parish following a recent “deer society” day on a neighbouring estate when guns from all corners of the globe turned up. Or it may be that their numbers are on the up and they will become a more regular sight around here. 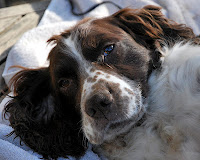 The world's worst and wobbliest Spaniel was due his "spring coiffure" so the lady who sleeps on my left went at him with the clippers in the garden. A wide variety of objects were removed including twigs, a lost Christmas tree decoration and a small family of shrews. The garden is full of hair and feathers from our first and last Spaniel, smelly fluff that provides useful nesting material each year for the birds in our garden.


Posted by Test Valley River Keeper at 20:31 No comments: