This Day of Days 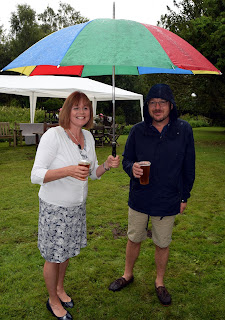 Apologies for my absence and tardiness regarding posts, but we've been a bit busy

but now we're back, back back, so on with the guff,

But first can I scotch rumours that I have relinquished my full time position on the river to concentrate on royal duties,

Nice to have options. 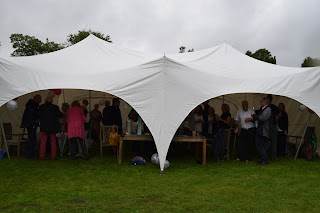 Where was I? Oh yes, the principle reason for my silence in the past few weeks has been the advent of our silver wedding anniversary. Not in a "quiet reflection" kind of way but because preparations were being made for a hellzapoppin party held last Sunday. Vino was sourced en France, a barrel of beer from Betteridges micro brewery a few miles up the valley and a big bin of Pimms was mixed. We would dine on meat cooked on a barbecue by The Weyhill farm shop, a few leaves, a lot of smoked Dever Trout and some stunning cakes made by a friend of Madam.

So what of this day of days? 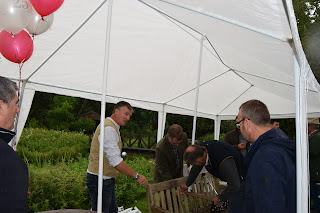 Which was celebrated by me and the other river keepers in attendance but not by the twenty or so people sitting under a gazebo that collapsed under the weight of water. River keepers, firemen and tractor drivers mustered and the thing was resurrected with the aid of several long poles, a roll of parcel tape and a table. Further drink was taken and the incident soon forgotten by the eighty odd people who seemed to have a high old time. Thank you to everyone who came along to help us celebrate 25 years of marriage and thirty years as a couple. 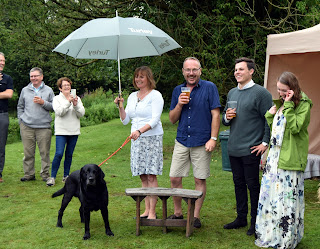 In among the mayhem that was the week before our bash, we travelled en famille to Cardiff for Child B's Graduation.
Like Child A he's done very well and also picked up a student award for some such thing or the other. He'll miss Cardiff, it's a tremendous city with some terrific places to eat (Portuguese for lunch on this trip) and some super shops in Victorian arcades. He's off to the Antipodes at the end of the summer for a bit of cricket and adventure which we are quite envious of.
Child A continues with the interminable quest to keep the streets of Thames Valley free from crime, she seems to be under quite a bit of pressure at times so come on people of the Thames Valley, up your game!

Well that's the family stuff and dedications done with so we'll move on to the river stuff.

We received word last week that the Upper Itchen had received the gift of thousands of half pound rainbow trout. Escapees from an as yet unnamed fish farm. The upper Itchen is a SAC, the highest level of environmental classification there is and let' s not forget that some of that water being pumped down the Candover stream in the name of protecting the SAC should be making its way into the Dever which is only a mere SSSI. It'll be a few years before the rainbows are hoovered up, but in that time predator numbers may spike when presented with such bounty and other fish species may suffer as a result. 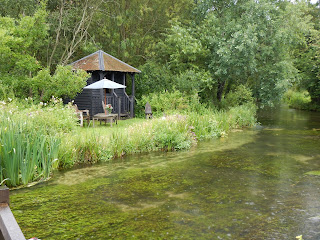 We may have had rain, and the garden looks great but it has done little for the amount of water flowing down the chalk streams. Groundwater levels remain low and gravels that should be submerged still stand proud of the water. It was apparent during the July weed cut that the clearing off process (conducted in the half light after returning from Cardiff - we've been very busy people) took considerably longer than one would expect and when an exasperated angler threw his rod at me and charged me with catching some of these sodding somnolant fish. The fly that I presented to what should have been a rattling run of water under a branch on the far bank hardly moved at all on landing. There are plenty of fish, although they are starting to bunch up in deeper holes but spook one and it will charge around and disturb the rest of the gang. They do rise, if a little circumspectly, but many are now preoccupied with sub surface feeding, it's never the easiest time of the year for fishing on this river but numbers caught remain up on the previous two seasons and late summer fishing looks promising.

With the trees now displaying to the full it is all too apparent how many of the ash are in trouble, I've earmarked half a dozen substantial specimens that must come down this winter before they start shedding limbs. It is a little sad as ash make up a substantial percentage of the trees in the wood, but there are a few specimens that seem to be in good health so fingers crossed for them. The walnuts that we planted a few years ago are in good health and their noses are on the cusp of poking out of their guards. 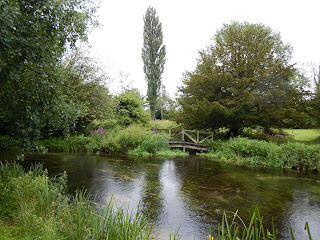 The fringe is in full bloom and at its best with spikes of loosestrife, drifts of monkey flower and forget me not and substantial stands of hemp agrimony that continue to draw the eye of a variety of butterflies. This time of the year would normally see all manner of moths stuck to the our side wall in the morning, not seen so many this year although this may be down to us being more judicious when it comes to turning the outside light off at night.

Well there was the flying visit to France, the trip to Ventnor on the Isle of Wight for a Hampshire League match that was done in thirty overs and a jolly day fishing on the middle reaches of the Anton.

But I've run out of steam as it's been quite a hectic month and as was pointed out many times at our wedding anniversary where some of our wedding photos were displayed.

So I'll drag this withered husk away for a restorative bath and seek succour in bubbles (bath) and wine (wine) and won't leave it so long next time.

This week's photographs have been brought to you by Child A and my Dad and thank you very much for that as my clever idiot proof camera is currently playing up.

Posted by Test Valley River Keeper at 16:08 No comments:

It's been an emotional time of late 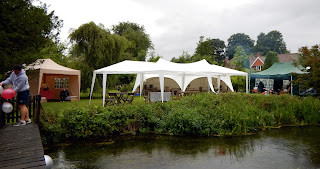 Apologies, but it's been an emotional time of late

Oh yes, fishing's ok, but the rain's done nothing, feel free to use a nymph.

Posted by Test Valley River Keeper at 21:11 No comments: