Why does the run up to Christmas now require sections of every High Street to be lined with a succession of shiplap sheds peddling overpriced Teutonic Tat and an ice rink? A Germanic invasion by the Weihnachtsmarkt that crept in under the radar, and a wave of retro winter Olympic legacy whipped up by Torville and Dean on dancing on Ice.

While we’re on Olympic legacy, the Duke and Duchess of Cambridge’s announcement of their impending arrival must count as one of the recent Olympiad’s most lasting legacies. The dynamic royal duo appeared a tad hot under the collar during the cycling, or was it Super Saturday? The name of their first born could provide a clue. Prince Bradley or Princess Laura? Princess Jessica or Prince Mo? or perhaps they will follow the Beckham’s example and take a name from a site memorable to conception, such as Prince Stratford or Princess Velodrome, HRH Lee Valley has a certain ring to it, but Prince Phillips Idowu must be a very very long shot.

Putting Christmas aside for a moment we have had Tom Cruise in town for much of the past month. buzzing about in a helicopter making a film about earth’s alien invasion. A cast of thousands in hundreds of vehicles have been filming car chases and much frantic running around under floodlights on the old army camp over the road. Two years ago I bumped into the Top gear crew filming in the service station that borders, what used to be our top cover strip (Oh for a jolly farmer). They were driving cars that had been converted into camping vans for comic effect and were heading for Cornwall, A large crew were filming James May by the air and water, while Jeremy Clarkson looked on, idly having a smoke next to the petrol pumps. Nobody seemed to mind, perhaps the proprietor who asked me not to use my mobile phone the previous day for fear of sending the whole shebang up in flames was not in attendance.
At home the river looks just as it should for this time of year, waves of low pressure line up across the atlantic bringing belts of rain interspersed by several days of cold dry weather, in the words of Pa Larkin....Perfick. Direct run off is limited and the aquifers currently receive a reasonable recharge. All bodes well for next season, and the intermittent cold snaps let deciduous flora and fauna know that it is time to hunker down and sleep before next year, as opposed to the chronic broken bedtime of recent mild winters. The river is bank high, and spring ditches are starting to flow but on the radio a metrosexual tit tweeted of an impending flood crisis. The Environment agency have issued warnings of the danger of some cellars suffering groundwater flooding but this should be expected in these environs at this time of the year. The river is full of fish, taking welcome respite in the voluminous flow from the Heron and Egret that made the most of recent low flows to stab away at any fish on the shallows. We remain woefully short of ducks flighting the pond although a few pay interest to the sexy Indian Runners in the paddock by the Mill House. Under a revised schedule our first bumble around the water meadows is imminent, we have a few of somebody else’s Pheasant about and there are some Snipe on the top water meadow but nobody knows what the day will bring, bar a fun day out.

The Chalk Stream summit held earlier in the month was well attended, a useful exercise, and should receive much publicity. Paul Knight spoke well on behalf of the Salmon and Trout Association with regard to their use of EU law in holding UK government agencies to task over their failure to provide adequate protection under EU habitat directive to the Chalk Stream environment, with particular reference to the Atlantic Salmon running the river Avon. Hugh Miles chucked up a couple of thought provoking films about the plight of the Chalk streams, Martin Salter labour MP for Reading, keen trotter and chronic user of hemp called for a chalk stream charter, which was backed by Summit Chair George Hollingberry Cons MP for Meon Valley and I sat next to Caroline Nokes Con MP who asked several relevant questions sotto voce in my ear while the film was on. I could drop further names and noises but enough toadying, the bottom line is that if the Chalkstream environment , of which the Uk retains 90% of the world wide resource, is not to be impacted upon, protection needs to be provided to the groundwater supply that feeds these rivers......simples.

At home, I fell off the roof. Flicking leaves from the gutter to prevent a drip that had disturbed sleep through several rainy nights something gave way and I plummeted to the floor. In my “Bruce Lee” days a switch of the hips would have landed me on my feet ready to receive intruders, but this time I landed flat on my back on the concrete floor. I have fallen twice as far from trees up the river with a chainsaw in my hand and knives in my pocket and just bounced, but landing on concrete I had a funny five seconds before stumbling nausiously towards home. Child B was in residence, and assumed my cry and raging was continued railings at BT Open Reach regarding rural broadband service provided, but thankfully realised that the attention of the medico or at the very least his mother was required. The call was made and the lady who sleeps on my left threw down her school issue pencils and raced to the side of her Hercules. 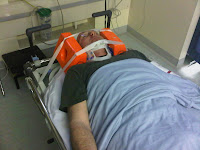 A trip to A&E followed, where, after two hours my befuddlement eased, the fantastic junior doctor who led me through the many checks, including assault by the roll over team, was not very old, I’d guess at 15, and the juvenile bunch in the radiography department were as mad as a box of frogs, think Chucklevisiomn with added radiation and you won’t go far wrong. Thanks to all at the Winchester County hospital who strapped me to the bed and put orange blocks on my ears, and to the lady who sleeps on my left for doing what she does. As predicted the black bits and bruises continue to appear and each day a different bit hurts. I have not miraculously developed a feel for foreign languages as happens to some who suffer a bump on the head, I do feel lucky to have survived an event that did for Rod Hull and Emu and my fear of heights greater than six feet is confirmed.