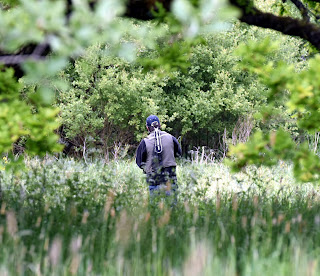 Today is the 13th May, there is no discussion over the prospect of Christmas tomorrow, my ruby wedding is not imminent, and we have not just had the millennium.

Yes, today I know what day it is.


I/We am/are back in the room, bar the surfeit of backslash punctuation

from distance of course,

smothered in sanitiser and with body temperature monitored every two minutes (orally!)

but fishing all the same.

The fishing hut is out of bounds as it is difficult to observe social distancing rules in an abode that is 8ft by 8ft square. 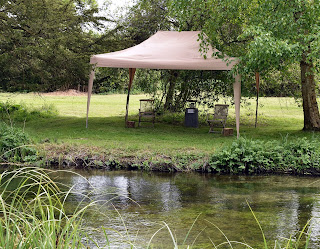 By way of shelter for our two anglers a day, we’ve erected a large Bedouin/ Tuareg tent affair replete with hookah and pipes on the opposite bank. There are rugs on which to lounge at distance, bowls of dates, wandering tortoise and incense continually on the go.

Fishing at Bransbury will be a little bit different this season.

Yes the Corona, and yes the social distancing, but the river has not been in this kind of form for some seasons.

There is a good head of water, clear and free from foam and algae.

There are fish, many many fish.

And there is weed, that I have already cut in April which is always a portent of a super season ahead. 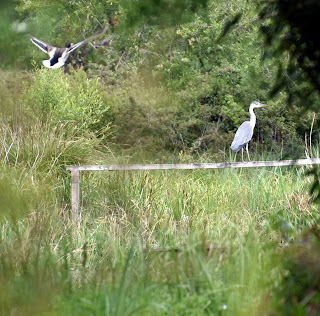 The Angling Trust have been magnificent in the past few weeks in making representation to politocos on behalf of all quarters of Angling. If you are not a member, please consider joining, they do great things in the name of all things rod and line.

The Angling Trust have chucked up advice on the correct course of action to take when flicking a fly or flinging a float safely in the coming weeks. It mirrors the advice we sent out to our regular rods a few weeks ago on how we envisaged fishing would be at Bransbury this summer. If we all stick to it, then we’ll see the season out. If people bend the rules as they go about their business, then the season could be curtailed sometime this summer when we go into lockdown for a second time.

A few mayfly have hatched and fish are just starting to show a little interest. 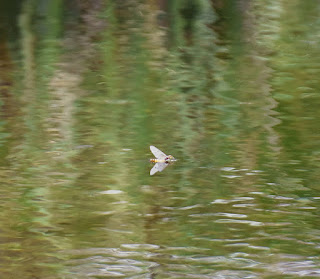 Here’s an Ephemera Danica making its entrance to the outside world. 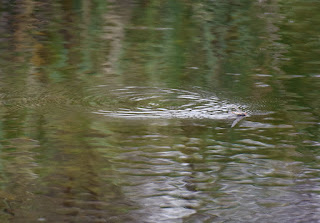 It floated down the river for twenty yards or so, 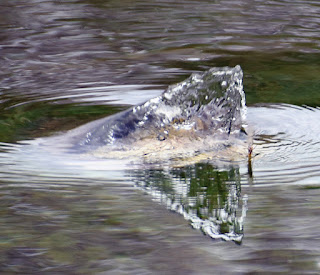 Before drawing the eye of Brer Brown Trout. 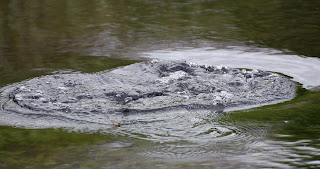 Who completely missed his target. It was a clumsy, slashy rise and a few seconds later the mayfly reach up for the stars.

It’s surprising how often this happens early in the season. It seems that sometimes trout need to get their eye in when feeding on surface flies and they miss the fly. Anglers are often hard on themselves when they miss a rise to their artificial fly but sometimes it is the fish that is at fault.

On a few warm days last week our kitchen played host to several daddy long legs, which may be the fly of first choice for the new opening day of the season. Hawthorn hatches were a bit of a dud, but then we did have a wettish winter, which doesn’t hawthorn fly larvae who have taken up residence in a soggy meadow. 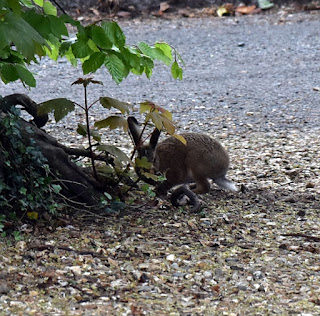 This leveret looks in on our yard a few mornings each week. We’ve a few about the place, which is good to see as their numbers took a bit of dive in this parish a few years ago.

I don’t know where all the swifts and swallows are.

Lord Ludg insists they are have all been captured by natives in North Africa and put into pies.

Lord Ludg has been out in his hot tub in the sun quite a lot of late (It is difficult to unsee the digital images).

Weather could be a factor in swift and swallow absence. Clear air with a dearth of airborne particulates may have caused them to move through the airborne significantly faster than they expected, causing them to overshoot Blighty for a sojourn in Iceland.

In further news of occasional cohorts,

The English has let his locks down during lockdown and now sports a tight head of curls on what was once a smooth shiny pate.

It’s an alpine look, with distinct echoes of Heidi. There is no doubt The English is apt to wander. He now sports a goatee, and with the wind in the right direction, each morning we can pick out faint yodelling….who will be his Peter? 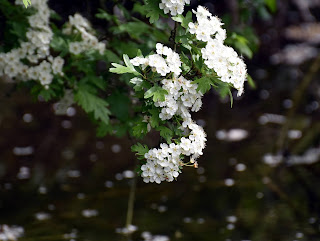 Zoom and House Party have been quite a lark over the past few months but goodness it will be good to bump (from a safe distance of 2m, no terms and conditions apply) into anglers on the bank over the next few weeks.

Hair, and the Age of Aquarius. 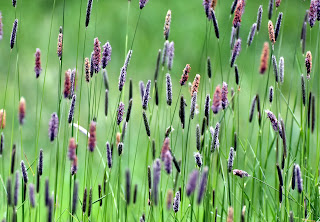 I’ll own that I’m finding it difficult to chuck up guff at the moment, and now it seems to be Sunday, I think. Each passing day acquires an increasing level of fug and the piece may shortly become a series of short public information films with musical accompaniment last heard on the demise of Brezhnev, Andropov and Chernenko. 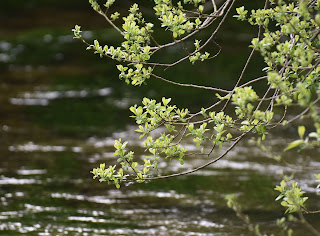 The Dever is in superb condition but this stretch remains unfished.

The Itchen carries some colour and I haven’t seen much grannom during my fleeting visits to its banks, but it is main river and has always taken a little more time to clear than this tributary of the Test.

Hatches of hawthorn have been all what one would expect following a wettish winter, sporadic and light with, with more of these terrestrial flies making it through the rain on higher ground.

Wet winter water meadows are anathema to the Hawthorn fly. 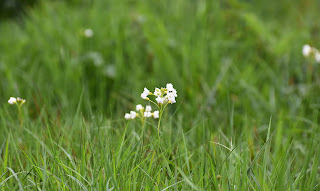 Grass is growing well, as is weed, and each must be cut, which kind of fills the day. The merlin is about and each evening as I cycle up the lane by way of exercise, my camera has been primed to catch a clip of it swooping up the road before me, but so far no luck. I’ve also given the field the “side eye” as there are several hares that have been hunkered down along the field margin. Wild garlic is in full bloom as is the cuckoo flower, although as yet, I’ve only heard a single cuckoo. Swallows, martins and swifts re slow to put in an appearance in this parish, the vanguard briefly appeared in the skies this afternoon. 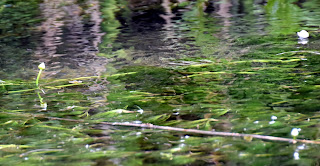 and fish demonstrated little interest, but mayfly all the same, which brought a lump to my throat.

It’s a special time of the year to be on the banks of a chalk stream and the appearance of Ephemera Danica et al always causes the mood to soar. 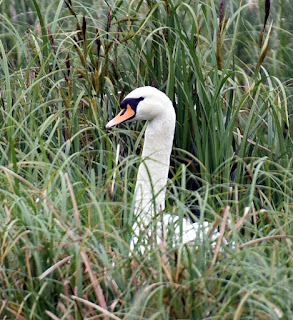 As I said earlier, we are following advice from The Angling Trust and Test and Itchen Association and are currently not open to anglers.

A few stretches have opened, which has come as a bit of a surprise.

We could open, and provide a safe fishing experience for our regular rods. There is a washroom in the yard where cars are parked and anglers would be asked to wash their hands on arrival, don a pair of the plastic gloves provided and make their way to the river via a single designated access point, that will be disinfected each day.

The fishing hut will be out of bounds, all seats will be sanitised daily and daily catches will be recorded online, filled in by yours truly each evening.

The fisherman’s washroom will be steam cleaned each morning as will all gates and points of multi contact.

I am confident we could fish quite safely,

I hope that the few stretches of river that have ignored the advice from The Angling Trust and T&I and opened for business, have given the matter a similar amount thought. 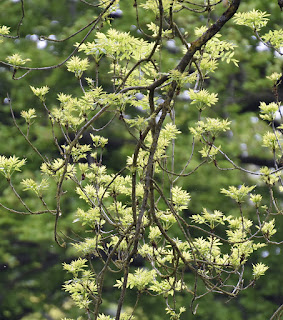 I didn’t expect it to be an issue at this halfway stage of life but hair has now become a problem.

It’s been many months since I visited my mad Turkish friend who always insists that he could do great things with my salt and pepper locks via the medium of some sort of jollup he imports from the other side of Europe. He likes to surprise me with his lit lighter in order to deal with any nasal hair that may be about.

It grows into an unusual shape and there are echoes of my Jesus and Mary Chain/ Inspiral Carpets phase of life . 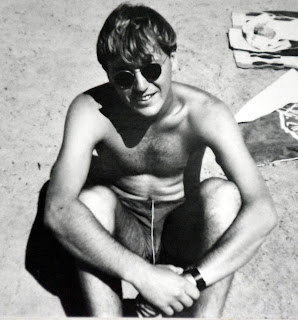 1990 and the age of Aquarius if anyone is wondering,

and where's the sunshine?

Crete if memory serves, with Madam and our mates.

They didn’t have gyms then, at which point I’d like to point out that I have never set foot in a gym in my life, which some people may find quite surprising, and let this photo stand as evidence that If you live well, look after yourself and keep clean you will never lose your looks.

Taken with my Praktica SLR by the way, on old fashioned film.

Colour film was available at this time,

but I took quite a bit of black and white stuff on this trip. 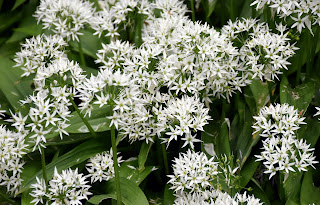 Getting lost in a box of photos seems quite a good thing to do at the moment. (and it may now be Monday, who knows?) I can remember the family slide show, with the ironing board very much to the fore but my goodness the quest for this photo has confirmed that I’ve taken an awful lot of photographs.

Six figures and counting in the digital form and a coffin full of the old school solid state stuff that takes two people to lift.

I don’t know how many photos you have to have to qualify as an archive.

Anyway, I’m off to order a magical thing called a “comb” on Amazon, plus some scrunchies for my impending pigtails.