Broadand? rarer than a Bittern in these parts 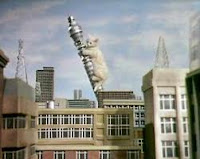 Apologies for the delay in providing regular updates but due to the blundering British Telecommunications provider who rule the poles and lines of these Isles we have been left without an internet connection for eleven days and counting. I am penning this brief piece of poorly written prose from a bench in my neighbours garden amid the melting snow and ice, safe in the knowledge that I can blag some of the neighbour’s “ wifis” while they are engaged “deep cover” in half an hour of “Flog It”

As yet there is no engineer racing to reconnect our supply, although one did arrive a few days ago and fixed the problem providing us with a quarter of a meg of broadband which fizzled out after an hour. Four hours on the phone to Sanjay and Co have failed to move things along and as a result I have kindly been given contact details for several who frequent the Chairman’s lair and have subsequently relayed my tale of woe which stretches back over many years. As yet I have heard nothing.

Five years ago the brains of said blundering British Telecommunications company deemed it cost effective to replace the twenty nine poles and mile and a half of cable that make up this ancient telegraphic spur that feeds four houses with an almost unusable broadband service. Fifty yards the other way in our neighbour’s garden stands a pole that is connected to an exchange in the other direction. It provides a super fast broadband service to the remainder of the houses in this small village.

Posted by Test Valley River Keeper at 18:52 No comments:

2012, for those without Alzeimers, a never to be forgotten year. 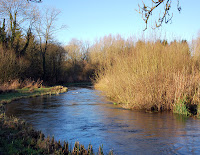 So there goes 2012, and for those without Alzeimers, a never to be forgotten year. From the Jubilee and that funny flotilla in the rain, to an Olympics that many thought we would never pull off. A Loon who jumped to earth from the edge of space and Whiggo who enjoyed a successful two week tour of France in lycra and comedy side burns. The win in India wasn’t bad, with both bat and ball, and following a brief period of nudity in rural France a royal baby is on the cards. Jimmy Saville was a bit of a blot, but not apparently unexpected, and didn’t the BBC get their knickers in a twist over a variety of things? At home, Feliz Baumgartner explorations of a homespun kind were conducted with a fall from the roof and for the first time I have been paid some money for the rubbish that I write and have enjoyed “own brand” products in our weekly shop on occasion throughout the year.

On the river, conditions have been unmatched during the time that I have been falling in from its banks. In March, the valley was on its knees, a Bob Geldof moment was approaching and the Hollies were sounded out over a re release of “Who’s gonna drive you home” and then it started raining.
And it hasn’t stopped since.

We end the year with water pushing over the banks and mouth watering prospects for next season with all the benefits that derive from the river having a proper scrub behind the ears during the winter months.

Plenty of fish abound in the swollen river although different lies are assumed in high flow, we have not experienced a frost for a few weeks, the river is not cold, and both Trout and Grayling feed sporadically throughout the day. The Roach are in sublime form and several top two pound and I spied a double figure Pike from the plank bridge below the fishing hut, before the bloody thing gave way giving a brief flash back of the “Felix” moment before I grabbed the bough of an Ash (yes some still exist despite reports) and swung, in the manner of Tarzan, to safety. The lady who sleeps on my left has since produced diet sheets after both a roof and bridge yielded to my burgeoning winter weight in the space of a week. The “to do” list grows ever longer and will be tackled for the opening three weeks of the year with a couple of degree students studying all things environmental.

Despite several attempts I have been unable to get any photos of the Bittern that currently resides in the reeds around the flight pond and top shallows, Otis has disturbed it on several occasions in poor light and pouring rain resulting in a succession of blurred images, but it seems to hunker down elsewhere during the brief periods of sunshine.

If previous visitations are anything to go by it should hang around for a few months so there may be more chances to get a picture. It is on the “red list” of UK birds that need looking after. The Uk population reaches its height during the winter with an influx of birds from the east but even then the National Population is numbered in the hundreds. This is the fourth year in the last five that we have had a Bittern take up residence and always around the pond and top shallows where the reed beds and Phragmites are at their most thick after years of burning them off, in fact four years ago a Bittern exited stage left with sparks chasing his tail after some particularly rapid reed burning during a dry March. 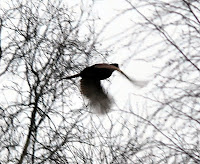 End of year bumbles through the water meadows fell to the weather, although plenty of Pheasants abound in the warm meadows, along with a few woodcock and snipe. No duck to speak off, and the geese have pushed off, but then there are no end of wet splashes about for both to dibble away the day elsewhere.

The Bourne rivulet, one of Plunket Green’s “Bright waters” and like the Dever a tributary of the Test has taken a bit of a hammering this year. Mid-summer it had a thousand litres of diesel tipped into its course leading to a vast array of booms and sponges being produced throughout its length to soak up the floating oil, and for the past few weeks it has had raw sewage, bar a few johnnies and floaters skimmed from the top, pumped into its channel at St Mary Bourne.

The Water Company has had a perennial struggle with rising groundwater during wet winters and has deemed the only solution to send the stuff straight down the river. Warnings have been issued to the local dog walkers and the like to wash their hands and pooches if they happen to be crossed with river water.

This is not a new problem, it has happened in previous wet winters yet for whatever reason, financial, logistical or environmental, no action has been taken and the problem remains. The groundwater level is unlikely to fall in the next few months so the pumping is expected to take place for some while yet.

Southern Chalkstreams are a unique environment, of which this country holds between 80 and 90% of the planet’s resource. If another country were behaving in such a way towards a limited natural resource, a rain forest or a coral reef perhaps, would we remain silent?

The Environment Agency, Natural England, Riparian Owners, Riverkeepers, Fishermen are all being urged to work towards a “chalkstream ideal” in which habitat is preserved and biodiversity increases, all are toothless in the face of OFWAT and powerful Water Companies who are able to do as they please in the interest of consumers and shareholders.

The Salmon and Trout association are currently using EU law to hold government to task over their failure to provide adequate protection to the unique chalkstream environment over many years. The opening gambit starts with a complaint to the EU about the upper Avon. Details of the case brought by the Salmon and Trout Association and supported by The Angling Trust can be found at www.salmon-trout.org and www.anglingtrust.net

Please give your support to their efforts to protect the Chalkstream Environment.