Trust You to Trust Us

Little bit lost for words, so here's a film

Trust you to trust us

Posted by Test Valley River Keeper at 19:26 No comments:

Not quite a Damascene moment, but I think I got there in the end


Apologies, fishing free this one, and sans photos, but I need to write this down before I forget a conclusion drawn.

I was recently sent a quote that seemed to sum up my current feelings about the impending referendum:

"How foul this referendum is. The most depressing, divisive, duplicitous political event of my lifetime. May there never be another"

What must the rest of the world think about how we have gone about this business?

There are many issues that I (and others) have been wrangling with in recent months, I won't list them here as it would extend to a plethora of words and I have banks to mow, but I think I have given each matter enough thought (months and months) to make my own decision; and "Vote Leave" and "Vote Remain" camps you have been no help at all

But with a nod to the true seer of the age

EU, I remain your most humble and obedient servant

#Putting my faith in the next generation making a better fist of attending to the machinations of the EU and further global matters than my own contemporaries (no pressure kids, but I've every confidence)

Foam Free and Pipsqueaks with Popguns 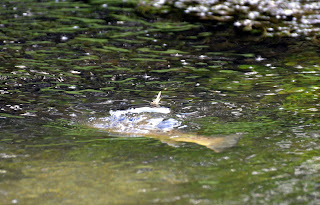 Mayfly hatches these past few days have been phenomenal. If I'd pootled up the bank in the car I'd have had the windscreen wipers turned up to eleven. It's been a good start to the season, a hundred fish before the end of May is a reliable bellwether to a reasonable start to the season on this stretch of the Dever and we passed that mark with two days to spare, although we have experienced several days when getting your artificial offering noticed among all the naturals has proved an impossible task. 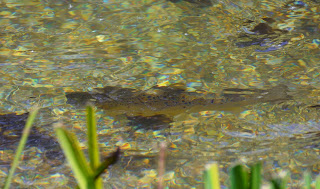 Among the Mayflies there are good numbers of blue winged olives, last Friday we had a hundred or more of the three tailed wonders dancing away in the garden.
I am well aware that this piece of guff is on the cusp of reverie (fear not there is sterner stuff to follow) but the water is also remarkably clear and just as every angler at some point last year commented on murk and foam, most angler's this year have remarked how clear the river has become in the past few weeks and currently the river retains the sparkle expected at this time of the year.

Last summer I pitched the theory that there was trouble at the water treatment plant upstream, we had foam, dirty water, and for the second half of the season fish were having a tough old time of it. I kicked up as much fuss as I could but these are powerful institutions, if they feel need to send raw sewage down a chalk stream SSSI they will do so because those charged with regulating UK water quality are pipsqueaks with popguns in comparison (See Bourne Rivulet for the last two decades) any business with a potential to impact upon the aquatic environment is increasingly held to account by EU Water Framework Directive. Following the foam thing, I made the most of the freedom of information act and requested the last twenty years worth of weekly turbidity readings for the Dever at the bottom of this beat.

Thank you to the EA for promptly providing the information.

It made interesting reading, and yes figures were higher last year but the written observations of the various operatives who took the samples used the word "normal" in their visual assessment of the clarity of the water for both last year and this year. There are folk who fish this river approaching their tenth decade with the associated eyesight that comes with such venerability that could see the colour of the river last year was not and should not be considered normal, and it is a shame that a similar observation was not noted by those compiling official records which may be referred to at a later date. 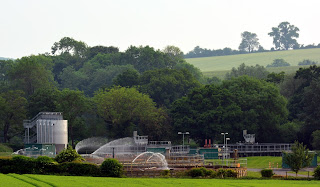 Foam is currently absent and water clarity has returned to what it should be from the "abnormal" murk and foam of last year. 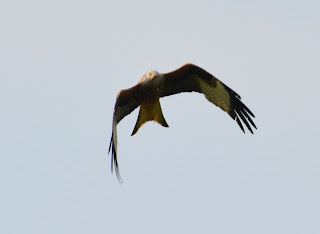 Returning to reverie, weed growth is excellent, ranunculus is out of the wate, in flower and will need to be tickled up during the impending weed cut. Kingfishers continue to feed young and we are currently "heron" free. although Tarka continues to take chunks out of fish and it is noticeable how few big fish are in the river. There is the odd leviathan, one senior hen of around six pound continues to haunt the far bank on the bottom bend as she has done for several seasons, but far fewer large fish than previous seasons, with fewer mature fish on the spawning gravels in winter and fewer fish making the trip to the smoker during the season.. 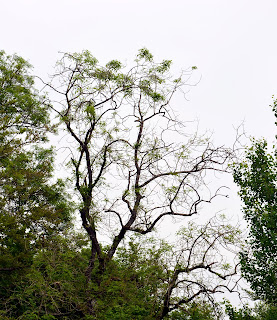 In the wood the Ash trees are not so good, with many suffering from significant die-back, much worse than previous years it looks like the beginning of the end for many of them, the groan from my big orange saw in the workshop is audible, although there are hands being rubbed together over in Ludgershall. 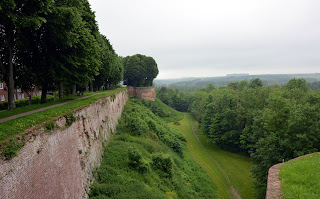 Half term just passed and we popped across La Manche for a few days in Northern France. Madam had expressed a wish to return to an area that we had only ever driven through at high speed on our way to elsewhere until our tour of the Somme last September. We stayed in Montreuil sur mer in a three story tower with a spectacular bathroom below an atrium that covered all three floors, a property that you could only share with someone you knew well. 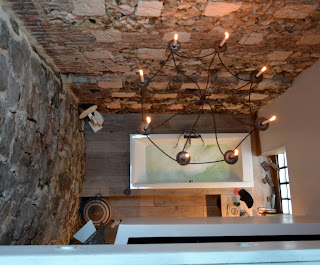 It was possible to hold a conversation no matter where you were in the house, and at one point I considered using my fishing tackle to lower down Madam's request for further supplies (more bubbles mostly although of the alcohol variety) to save my creaky knees the two flights of stairs, and my ruse to sneak some particularly ripe Epoisses as a pre dinner snack was rumbled by Madam in the bubble bath below who picked up the scent the moment the fridge door was opened two floors above.

A postprandial walk along the water meadows, saw us walk several miles along the river only to find our return journey blocked by flood water. 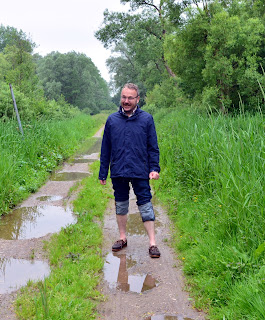 With a chivalrous mood upon me, I rolled up my trousers 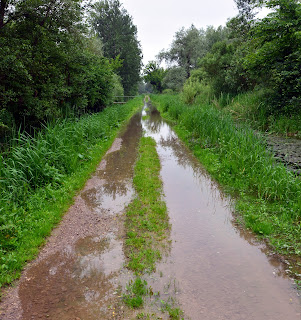 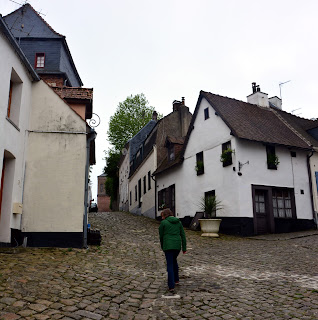 There are those (Ghandi, Dalai Lama and perhaps the Holy Ghost himself) who would make great play of such an apocryphal afternoon, but I choose not to talk about it, so any mention made of the event on the internet or in future religious text has not come from me. 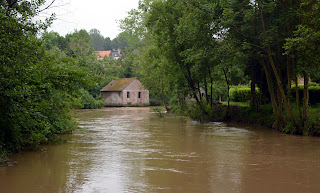 Fishing rods were secreted in the boot but the rivers were unfishable, bank high and easing themselves out across the fields.

Montreuil Sur Mer is an interesting place to stay, there's a statue of Marshall Haig in the main square who was billeted in the area with his staff during WW1 and was obviously drawn like us to the excellent restaurants and ambience of the town. The tower was stunning and we enjoyed excellent Wifi throughout our stay. 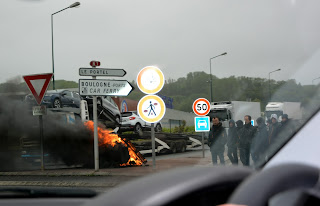 There were none of the reported fuel shortages although we did come across some roads on fire when we popped up to Boulogne for lunch, and how this fits in with France's push to meet EU clean air requirements I don't know but the few picket lines we came across in Boulogne were fairly convivial with pickets and police sharing saucisson and vino around a fire. Driving back to the tunnel the roads were clear, Calais was a breeze and at this point can I issue a a reminder with regard to certain areas of the UK media that, If we're not scared they're not doing their job.

We caught an early train back through the tunnel to join a motorway system that no longer functions as intended, a house free of Wifi in an overcrowded corner of the UK and a debate on EU membership in which behaviour on all sides has deteriorated to an embarrassing level,

Last bit on Europe, as I've had my fill of spurious tales from all sides regarding life after the referendum (can we please bring the voting forward a bit, the 24th June does seem a long way off) I will now deal only in FACTS regarding Europe.

The England football team will not win the European championships.

Oh yes almost forgot, returning to Media and the radio, the entire canon of Desert Island Disks is available free as a podcast. Quite addictive I breezed through a dozen or more while topping the paddock last week. Sue Townsend was a tough listen as was Victoria Wood and goodness Kirsty Young is a talented interviewer. Well done the BBC for not fiddling with a format that has worked since we last won a national football tournament and for making the entire back catalogue available as a free podcast.

Madam and myself are once again home alone as Child A is away in Greece and Child B in Spain. Child A has also been offered a position in the control room with Thames Valley Police, which is great and makes all the hard study over the past four years worth it, as well as making parents proud.
Child B experienced a dramatic departure that saw Madam driving towards the airport with his passport in hand at 3.00 am on a Sunday morning to meet Child B who was driving in the opposite direction, they met north of Arlesford and we think he made the plane. The break will do him good as he has put some hours in during his placement at the planning company, and possibly make him less forgetful.

An Addendum:
Just been supermarket shopping on the hottest day of the year so far. It is quite remarkable what local town society consider appropriate attire for collecting messages on a warm evening.
Note to self: wait until it starts raining before going shopping again.

Posted by Test Valley River Keeper at 19:58 No comments: