Not Rhianna naked in the back field again!

It has been mooted in some circles (painting and decorating mostly) that I have been banging on about the lack of water a little too much of late. Now that it is very much in the public eye and action plans are to be implemented to stop everybody getting too thirsty, I will try not to mention it again for a while.

There are some good looking birds in the fields around here, and I don’t mean Rhianna getting her kit off for another album cover with an agricultural theme. What Cock Pheasants remain following the winter’s shooting are in pretty fine fettle, tip top plumage to catch the ladies’ eye. The valley is still inundated with geese, well over a hundred Greylags and Canadas on the top water meadow; the sheep will be out there soon which could make it a tad crowded. There are also plenty of Pigeon feeding hard on the field behind our house most mornings when I draw back the curtains. Only the odd hare out there at the moment. It’s only six and a bit acres but some Springs can see a dozen Hares out there mucking about.

Earlier this week we played host to a car clad with bits of wood and a camera crew shooting the front cover for a book that is soon to be released. Most who saw the car, commented that they had owned one once and hankered after days when motoring was much simpler. Give me ABS brakes, powered steering, air conditioning and air bags any day. The memory of my first car, an 850cc minivan that we hand- painted with Hammerite green just to make sure we got all the rust, is still fresh in the memory. Brakes that must be pumped two or three times to work, sliding windows that didn’t shut, a heater that didn’t heat and a mixture of cross ply and radial tyres that drew £36, (one week’s living expenses for a student at the time) of fines in a day. The car clad with wood was plonked on the lawn and photographed with the author and a dog for most of the morning, an exhaustive process the results of which will soon be available at all well known bookstores. 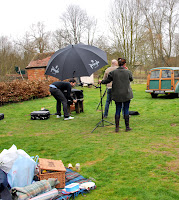 To add to the car parking chaos of the day, one of our regular Grayling fishermen arrived for a last cast before the close season, at the same time as the camera crew, beautician, publisher, and wooden car man. Fresh from the Frome he had caught a fish of a lifetime earlier in the week, a 3lb 12oz Grayling that was well over 50cm long. They don’t go that big here but there are a few 2lb plus fish in the river. He bought along a film making friend who had just returned from Mahseer fishing in southern India. He is responsible for some of the better fishing programmes that have been made, including my favourite with Bob James and Chris Yates, who Paul Whitehouse said of recently:

“He’s that bloke who uses split cane everything, he’s even got split cane hair!”

There are a few fishing programmes that I find hard work, the presenter of “River monsters” paints the riverbank as a scary place to be, and if Robson Green were fishing on the opposite bank I would spend most of my fishing time firing all manner of things at him with my catapult, particularly if he took his clothes off and jumped in the swim, as he seems prone to do on occasion. Anyway “film man” and “regular”, negotiated the sprawling photo shoot. “Regular” picked up Grayling throughout the day, all to nymphs, and “film man” having bagged 60 Mahseer the previous week on baits that sounded suspiciously similar in shape and size to the fat balls on our bird feeder, took a dozen Roach to a pound and a half on trotted single maggot.
That’s it now for the Grayling, Roach Pike and Perch who will soon turn their minds to spawning. It used to be a frustrating time for me as my birthday falls on the final day of the coarse fishing season, any new tackle given as gifts would not see frontline action, only practice runs in the garden for three months until the season re opened on June 16. Nowadays stillwaters stay open throughout the year and in most cases the coarse fishing close season applies only to rivers, although there are some regional byelaws that change things in some places.

On the river the interminable battle with Crack Willow continues but I shan’t go on, needless to say it is attritional, not very pretty, but victory will be mine. The water is clear, and the first shoots of Water Celery and Ranunculus are poking through the gravel. There are some very big fish in the river although the large hen that has been on the middle bends for the past three seasons seems to have gone. Olives continue to trickle off in the early afternoon and several fish feed sporadically on the surface, nothing regular just a rise every now and again.

Late last week I was asked to look at a short stretch of the Pilhill Brook, or what’s left of it (Sorry low water’s back) A tributary of the Anton, in turn a tributary of the Test, I would be surprised if it’s still running in June when it should be fifteen feet wide and a foot deep.

A lovely read as ever! Thank you for sharing with us.