Gold for Yorkshire! and it's all down to uncovered pitches

Mid August and the footwear of first choice for the angler is wellingtons, it hasn’t been like this for years, this time last year you could have fished all day in blue suede shoes without a mark on the upper on departing the river. The river has continued to creep up as the increased ground water flow kicks in, weed is having the time of its life causing the river to once again breach its banks. For the third time this year I will be cutting weed this month with an eye to getting rid of water rather than

holding it up. Fishing continues to be productive with most fish playing ball and very few sulking on the bottom. Sedge fishing has been particularly good and fish have been caught at all hours of the day. We have had few "Daddy" days and Greenwell's Glory has caught more fish in the afternoon than for many years. It’s August Jim, but not as we know it.......or have known it for some years. 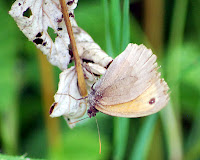 Up until recently kingfishers had been having a high time of it in these parts. Two pairs nested and adults and juveniles feast on the thousands of Minnows in the Millstream and Silverfish fry in the margins of the pond. Unfortunately one flew into our window and broke its beak. This has happened once before to a bird who thought he could fly through our kitchen, the children were young at the time and they were

having fish fingers for tea , but I think he could see right through to the garden beyond and may have been taking evasive action from another aggressive Kingfisher, seeking out a narrow tunnel to shake off his pursuer as they do below low hanging trees on the Millstream.

Moorhens are going through the motions of bringing off another brood, and we have a few ducks about that flit from an evening on the barley stubble to a night on the pond. The valley has been full of geese for much of the year and both Greylags and Canadas have also sampled the stubble.

The chubby Bream in the pond are quite a bit bigger than I initially thought, on a warm afternoon a shoal of twenty basked in the sun a few inches below the surface, out of character for the brainless bream they were no doubt urged by the canny carp to give it a go the smallest was around five pound andthe biggest pushing nine.

Many of the past days have passed with my earphones in listening to the Olympics. Coffee, tea and lunch all fitted around finals, a fantastic fortnight that exceeded all expectations (the Olympics not my recent work on the river) Steve Redgrave has once again starred, many a time the camera panned across to him and he was in the arms of a young female rower or bending down sorting out his water. Most anglers want an update on the day’s action that they are missing and with a strong Yorkshire showing in the medal table, how long before Geoffrey Boycott rocks up on the pundit’s couch to proffer opinion on the latest synchronised swimming oor taekwondo, with all success atributed to uncovered pitches no doubt! As Yorkshire have claimed more gold than Australia he could be unbearable during the final Test against South Africa. Jessica Ennis is odds on to be Strictly Come dancing Champion sometime in the near future although the Taekwondo medallist Jade james should get top marks in the Argentine Tango if she doesn't have Anton's eye out!

At the London 2012 fifteen shooting medals were on offer and good old Pigeon Pete, fresh from the farm, kept his cool to pick up a well deserved gold, so why no fishing? There is plenty of competitive fishing, coarse, game and sea all have competition at a local, national and international level. Casting competitions would be what skeet shooting is to pigeon shooting. Sky sports put on “Fish O mania” each year where anglers fish in a perfectly round lake where all swims are equal to present equal conditions for all competitors. It's not for me and the presence of a sky camera team at each peg must make the fishing a tad tedious but it does make for equal competition. Coars fishing matchesare more often than not influenced by the luck of the draw. As a youngster I fished for a few years in a junior winter league on the river Dee, most matches were won from the same dozen pegs, if you were lucky enough to draw “ the slab” or somewhere thereabouts you could trot a single maggot six feet below a stick float and bang out a couple of pound of dace to win the match. If the slab was not yours for the day it was feeder fishing for three or four fish and a section win.
Since La Tour and all things Velodrome, the lanes around here are littered with loons in lycra sold the cyclo dream by Wiggo et al, If Norman Thelwell still stalked the valley and had chosen bikes over horses he'd have a lifetime's subject matter. Other sports may follow suit, and I keep a keen eye out for sculls on the river and archers in the wood, but would a gold medal from an Olympic fishing competition have a similar effect on the number of people getting their rods out?

i did have to contend with a canoe on a recent day on River Ba on Isle of Mull, river in full spate and just as I'm about to lift off my cast when a polite 'excuse me' comes from the river. I jumped 3 feet in the air and looked to see a young couple in an inflatable canoe back paddling furiously...That was my last cast of the day. I can take a sign from the fishing gods as well as anyone.