Reports of Animals and Some Somnolent Spooks 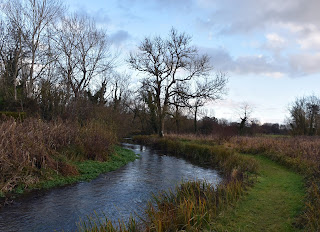 Beachtung everyone, there is much to discuss.

Just back from a trip across the North South Divide that is the M4, to Swindon to source some more kitchen chairs for Moss to eat.

and well done the smart motorways for being environmentally aware and right across the need to promote biodiversity.

The clever digital signs on the west bound carriageway remained blank, so we can conclude that the animals reported were obviously quite small and based in the north with an inherent aversion to central reservations.

I'll attend to river matters in a moment, but first, as promised in the last chunk of guff a brief word from Cambridge analytica on graphs recently presented.

A packet of papers wrapped in brown paper with the words "sensitive material" written diagonally across one side was recently pushed under the door. Contained within were the groundwater level readings taken since 1952 at Cranbourne in the upper Dever Valley. 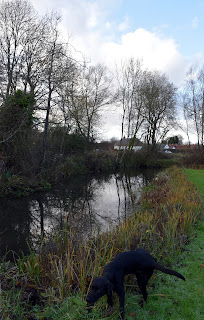 It may come as a surprise to some, but I can deal with a graph, and while Command Centre Central's interpretation is one of "no demonstration of a decline" draw a line through the lowest levels experienced each year or the median level for each year and the line doesn't rise up. At which point we could get bogged down in discussions over centiles, percentiles and any other kind of tile that may crop up. The annual rainfall for the region mirrors the falling line which makes sense. Detailed analysis,

let me put that another way,

a brief look at data collected since the start of the current millennium at Cranbourne throws up an anomaly which does not conform with experience on the ground. A public information request has gone into weasels at the water company for further groundwater data from another borehole in the valley. Further details and inevitable diatribe to follow. 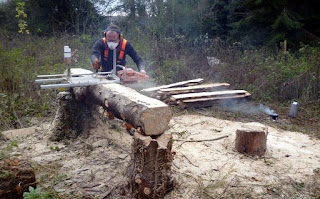 Leaving questionable analysis of data to return to the real world, the mill has been put to good use and we are now plank rich. (Photo courtesy of Lord Ludg) 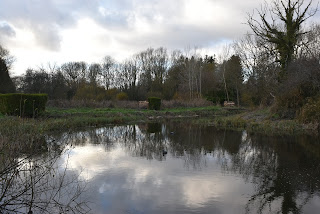 Duck hides have been both built and repaired and inter-planted with beech, 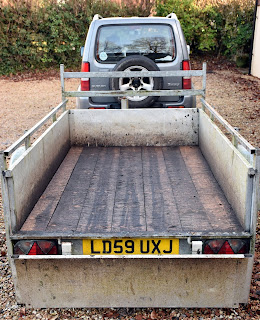 the trailer has a new bed 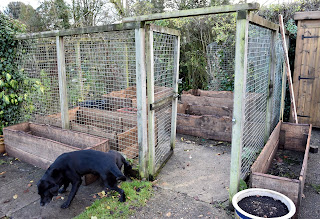 and a plethora of raised beds for vegetable production have been built.

We are confident that we have now attained a level of self sufficiency that should ease us through the shortages that seem to be scheduled for spring.

We've most things covered, but wine remains a worry. I've yet to sample a decent UK red and OK the English fizz, but it's a bit pricey when there's both an austerity and brexit on. My own efforts with the grape in the garden have been sharp at best, grapefruit bitter at worst. Next spring may be the time that the thirty two year old unopened bottle of Bacardi and the twenty year old bottle of Bells at the back of the cupboard come into their own to see us through the shortages.

A few brown trout are spawning and recent rain has been most welcome and has made more gravels accessible, although the river remains crystal clear and grayling fishing is quite challenging. We've had a few frosts but not enough to do for the stinging nettles. Temperatures today touched double figure in the afternoon and a few olives put in an appearance. Swans are beginning to gather on the water meadow upstream, although no sign of any geese yet. We've plenty of duck about and many moorhen scuttle across the lawn to feed on crumbs from the bird table. Coots and dabchick however are conspicuous by their absence. Both flightless and easily mistaken for an eel (An otter's principle source of sustenance according to some) they are easy pickings for the teeth of Tarka and numbers are down. Wither poor dabchick but brer coot could be a bit grumpy when it came to getting along with other water fowl. 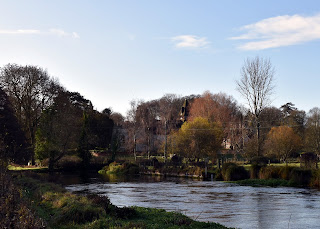 Just heard that George Bush senior has died. I didn't know the fella but he liked his fishing and visited this parish several times. It was always apparent when he was flicking a fly on the Common as a couple of somnolent spooks would be posted on the road bridge in Bransbury. I don't think the present POTUS is a fly fisherman. His flight flew over Maisie's work place when he was last over here and she reports that security has been beefed up since George Bush senior fished at Bransbury. If half a dozen helicopters and a legion of special forces suddenly rock up on the Common, we can be fairly sure that The Donald is having a go at fly fishing.


TVRK, An excellent post, thoroughly enjoyed that. Our plague is still the black, feathered Pterodactyl, there are dozens of them. My only envy of them is that I wish I was as efficient a fisherman as they are. Regards, John
PS I have plank envy.

Cheers John, numbers of graculus are on the up around here too, which is a worry.

Plans are afoot for plenty more planks yet. Hardwood this time, with a new design of bridge in mind. Think the Millau viaduct, only in ash and oak.

Thanks as ever for reading the rubbish that I write,

I came to this website following the letter regarding tolerance of cormorants in Shooting Times issue 28th of November. I work very hard on about a thousand yards of the river Wylye. We tolerate all types of fish including Pike but we are predated by a squadron of about 18 cormorants and by the way I suggest you try getting a licence to shoot them. My conversation with them was hilarious and too long to relay here. Even having a licence they fly about 60 yards up and drop in at the last moment. The only chance is to get into the roosts with a silenced 22.
Problemo. They roost where they are also nurtured by Wiltshire Wildlife Trust on their lakes in the Langford's. I received a lecture from on why we should tolerate cormorants despite the fact that they are an estuary and seabird. We are 50 miles by road from the sea and I suppose it must be longer by water. We are very happy to have otters and a pair of egrets visit regularly as do the herons. All of these have a place in and on the river. I think cormorants are being pushed here by lack of fish in the sea and there's probably a graph to be drawn from the downward spread of brown seals from the North and the rise in the numbers of inland cormorants. The Wylye is a little river and we cannot live with this level of predation. It's no good saying when the fish are gone the they will move on. The river will be irreparably damaged one day the corn was to die because of lack of fish.
I earnestly ask you to reconsider your benign attitude to this airborne disaster.David
king

Thanks for getting in touch and for reading the rubbish that I write.

Unfortunately I have been advised to err towards the benign on medical grounds after a vein started to throb in my temple and my right eye went all twitchy while dealing with BT regarding broadband, and then there was The EA, water companies and the road network of the south east of England (it's all on here somewhere, and now my eye is starting ton twitch again).

I'm well aware of the problem of inland populations of cormorants. They are a far greater problem on the stretch of main river Itchen that I look after than the Dever at Bransbury which thankfully remains relatively untouched by Cormorants due to its shallow nature. Heron are more of a problem on the Dever. A pond that I fished with my children when they were primary school age was cleared out by the things in two years. Graculus would arrive regularly in numbers in the afternoon before heading off to roost in a lone tree in the middle of the meadows out of range of the keeper's shotgun. They cut the tree down eventually just to push the things elsewhere.

I don't remember the piece in question in the ST but sometimes things can get muddied during an edit. I have written several pieces in the ST over the years highlighting the threat to fish stocks by avian predators, including one about fishing trips to central France and the Mosel where established inland populations of cormorants (and you couldn't get much more inland than central France) had learned to target anglers loose feeding a swim in the knowledge that fish would be drawn to the bait. The grayling population on the main river downstream has been decimated by the things.

I hope that explains a few things. Best of luck with your cormorant problem and the beautiful river Wylye and thanks again for reading the rubbish that I write,

I really liked as a part of the article. With a nice and interesting topics. Visit at - Soil Testing Cranbourne