Are We Not Mugs? 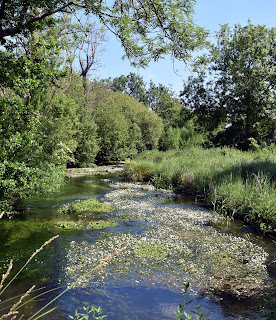 Apologies everyone regarding tardiness in chucking up guff on this platform, but for the past few weeks I’ve been stuck in a trance of incredulity at the shenanigans emanating from the cabal of political clowns who sit at the epicentre of the maelstrom of chaos in which we currently find ourselves.

Two weeks, sitting silently, gently rocking and open mouthed at the brass necked cheek of the piece. From Devious Dom, through disingenuous Johnson to Hat Mancock and his dodgy data.

I touched base with our local MP regarding a certain section of society who having attended several SAGE meetings and were right across what Joe Public were being asked to commit to, but drew the conclusion,

“well clearly, this doesn’t apply to me, powerful people have my back”

Are we not mugs?

She’s an excellent constituency MP who was informed of “Our great leader’s decision recently to remove her from cabinet” on social media.

She currently sits as chair of the Women and Equalities Committee.

During “Our Great Leader’s” recent televised appearance in front of the Parliamentary Liaison Committee, she held his feet to the fire repeatedly over the lack of female involvement in the decision making process over the current crisis.

She signed off her prompt reply to my email with the following:

“I have no doubt as to the immense damage the PM has done by refusing to sack Cummings. He is seldom so out of step with public opinion, and I assume is hoping people have short memories. It is awful.”

I considered contacting her again on several occasions since Teflon Dom’s sojourn north on a variety of matters, but as I have already stated, I took the open mouthed trance of incredulity route.

The following statement was a standard of this house for many years, particularly during the implementation of The National Trout & Grayling Strategy in 2015, but it seem apposite to revisit the old mantra:

We are increasingly led by loons 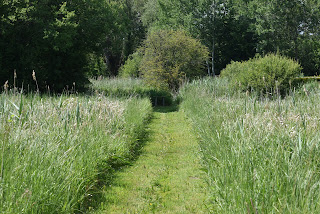 Dons loin cloth, grows beard and retreats to cave angrily waving a fist at the outside world, which is pretty much where I’ve been for the past few weeks so apologies again for the dearth of guff regarding all things chalk stream. Only this year it hasn’t been so easy, and rods have had to earn their fish.

Mayfly are few in number and the dance of an evening has, with a nod to the current requirement for social distancing, been low in attendance. We have yet to experience a significant fall of spinners. Which comes a something of a surprise as kick sampling through the winter chucked up many mayfly nymphs lurking in the weed and gravel.

The mayfly hatch was late to start, and the timed arrival of swifts swallows and cuckoos has been all to cock, so maybe next week will be the week. Plenty of fish have been caught, but it hasn’t been easy fishing. A heavy hatch should spark the locals into action, as most of them sit there on the fin looking upwards in expectation, but with a river so clear, a single artificial alone without a procession of naturals is more often than not ignored.

You will see from the amateur photos that weed is having a high old time of it. Ranunculus is in full flower, and water celery is growing clear of the water. It’s weed having a wonderful time, which is tremendous news for all folk that live in a chalk stream.

The reason the weed is wearing it’s hat on three hairs? 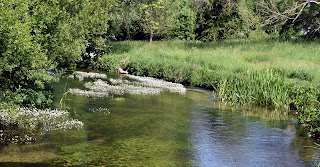 The water's receding at a remarkable rate. Both April and May were particularly arid, just to be clear that's the months and not Donald Duck's nieces. Rumours abound thatwe are on the cusp of having drought conditions declared in the south, but the evidence of the high winter flow remains with the river retaining a sparkle not seen at this time of the year for sometime.

In other news, we have finally been refunded the money for our early April six day trip to Porto.

It’s been a painful business with lots of wriggling by the online agent, and why we incurred a fifty pound admin fee for the issue of the refund was beyond me, but it extended my trance of open mouthed incredulity by a further three days.

Apologies, the name of the online agent…

We won’t be using them again.

Returning to the virus.

No not that F*&^% virus, that keeps making me cross.

At this time of the year, it’s very apparent that we have a cluster of mature trees infected with the lurgy in the middle of the wood.

If anyone needs a rustic broom handle, don’t be a stranger.

Looking up and not down, we find that there are some trees that demonstrate immunity to the virus. 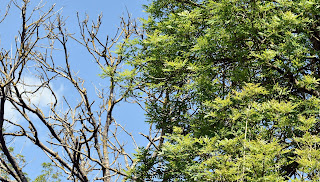 Here’s one of two ash trees on opposite sides of the river. Despite Suitable social distancing, one has succumbed to the virus, while the other seems to retain some immunity.

One will be felled and, following a period of maturation, be introduced to the wood burner.

The healthier tree will produce immune progeny and slowly a new population of immune ash trees will form.

If anyone was unsure, the infected ash tree is on the left.

This virus will impact on the make up of woods in this area for several generations, and take decades to be defeated.

Fingers crossed mankind comes up with a solution to the crafty covid 19 a little sooner than that.


TVRK, The Boss and I have now stopped watching any stupidity, sorry news, we are now not as slack-jawed or amazed as we were when watching said news. Our amazement at the brass-necked cheek of people who don't seem to have a clue what they are doing remains.

I fished for a few hours the other Monday evening and caught beautiful Rudd, Roach and a Crucian and totally forgot the idiots for a few hours. A pleasure, a real pleasure. Your river looks beautiful, that's what I call a proper office.

Now should you ever have any small pieces of seasoned ash planks, 320mm x 220mm, that I could plane down to 22mm thick for woodcutting and printing I'd be very interested. Please see work on johnrichardsonlinoprints.blog. Stay safe, all the best, John

Get A Blank ATM CARD And Cash Good Money/Funds Pay Your Debt directly today in any ATM machine around you anywhere in the world. contact cryptoatmhacker@gmail.com.. It's 100% guaranteed secure with no worries of being caught because the blank card it's already programmed and loaded with good funds in it, in such a way that's not traceable which also have a technique that makes it impossible for the CCTV to detect you, i am not a stupid man that i will come out to the public and start saying what someone have not done. For more info contact Mr john and also on how you are going to get your Card, Order yours today via Email: cryptoatmhacker@gmail.com