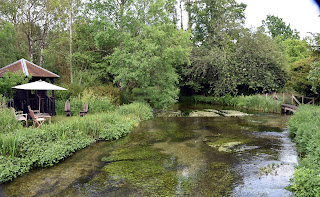 Christopher de Cani is neither unwell or away, he’s just been a bit busy in the garden.
Apologies everyone, I know it's been a while, but on this slow walk back out into the light and a return to normality, life’s been a bit hectic, details of which to follow, But first the Mayfly.
Goodness it’s been good on the Dever. The last knockings of May and the early skirmishes of June saw some very heavy hatches with spectacular dances between the beech tree and sycamore that tower above our garden, followed by some heavy evening falls of spinners in perfect conditions for brer mayfly.
Which is a good thing and bodes well for mayfly fishing next year.
Olives are also about along with a few large sedge. Many fish have been caught and the local smokery is already running at full chat. However we are now experiencing the consequences of such gluttony with many fish now sulking, feeding only occasionally while suffering from piscine gout. The mayfly were late in appearing and are late in disappearing, the June weed cut is now underway and the mayfly are still pouring off. 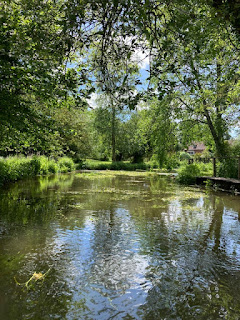 Weed has done well and carpets of flowering ranunculus are the main feature of this stretch of the Dever.
When weed growth is as prolific as we are now experiencing the main flow of the river is pushed around and is often right under the feet of the angler flicking a fly. While attending to the fringe earlier this week I disturbed many fish that were hugging the bank due to the main flow being pushed into the bank by verdant mid river weed growth. 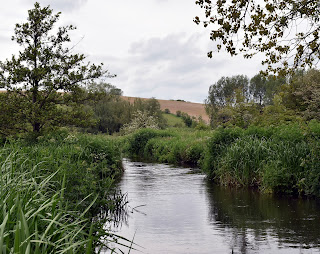 Early this week I received a kind invitation to fish the Avon midway between its Nethers and its Uppers.
I’ve been a few times before and its always a fun afternoon in good company. 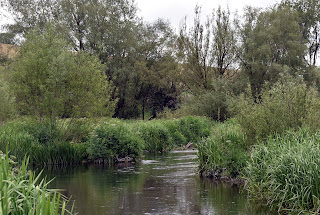 Carrying a little more colour than the Dever, fish betrayed their presence with free rises during a heavy hatch of mayfly. Five fish, three on a mayfly and two on a klinkhammer as some fish were ignoring brer Danica and feasting on a steady trickle of olives. 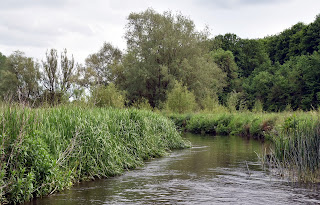 I was keen to take in the river restoration work on the top beat that had been carried out a couple of years ago. It’s a sensible piece of work, void of the extremes of some re-wilding projects pushed in some quarters.
In normal times half term would find Madam and myself off and away to foreign climes and living for pleasure alone.
Well the Pando put paid to that so we went for a few walks instead. 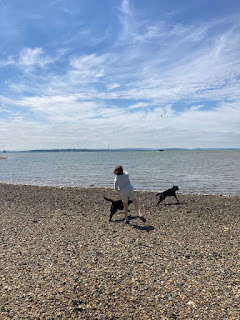 Firstly down to Titchfield to follow the canal down to the coast at Hillhead for a picnic on the dog friendly beach. 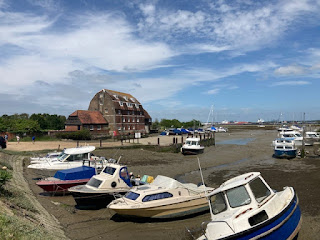 Secondly to the other side of Southampton water and a bumble along the water from Ashlett Creek to Calshot.
Ashlett Creek nestles between the Fawley oil refinery and Fawley power station which is not something that the Ashlett Creek tourist board would possibly seek to promote. However, by the old tide mill and marina accessible by boat only at high tide, the refinery and power station are invisible and our “holiday in a day” commenced.
It’s an easy flat walk for us oldies and brim full of interest. 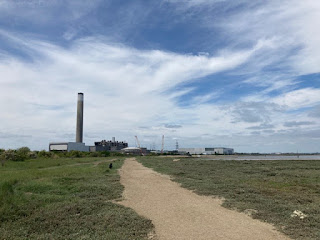 Fawley power station is currently being decommissioned including the 650ft concrete chimney stack that has stood sentinel over the Solent for sixty years. Myth has it the thing is the highest point in Hampshire, it's not, but its aid for navigation cannot be underestimated. Every ship, cruise, freight or naval, that rounds the Isle of Wight heading to Southampton must receive the advice over comms, “Just head a bit right of the big chimney” 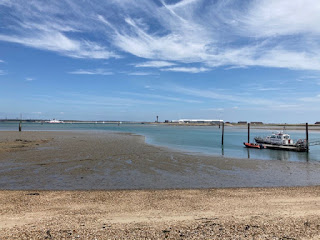 Part of the Fawley site is now used for the manufacture of wind turbine blades. There were many piled up on a vast expanse of hard standing waiting to be transported by pontoon to their offshore destination. The two mobile cranes detailed to manoeuvre the things onto the barge have 90 tonnes of ballast on the back. The blades are collosal, why we don’t see more wind turbines with a blade down is beyond me as the stresses on joints various must be immense. 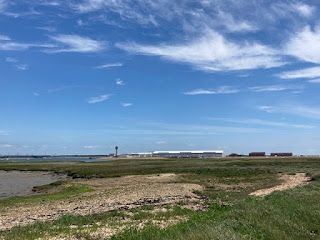 On up across a swing bridge and the marshes to Calshot a place that Madam knows well. Formally a centre for seaplane activity the place now operates as an activity centre and velodrome that year six of the local school visit each year for a residential week of activity. Madam has attended in a supervisory/having a go at lots of fun activities role for many years. 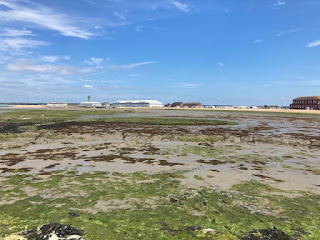 We had a picnic on the beach and both commented on the dearth of big ships entering Southampton water, one oil tanker made stately passage but the usual procession of banana boats, car transporters, container ships and cruise ships was absent. 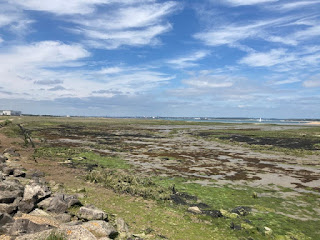 It was good to be out, and we had a nice picnic in the sunshine on the beach but Italian lakes it ain’t.
Continuing our slow walk out into the light, life has become a social whirl with a series of garden based meetings with friends and wines of all colours consumed.
I’ve always been a firm proponent of the “awkward silence” when in company. 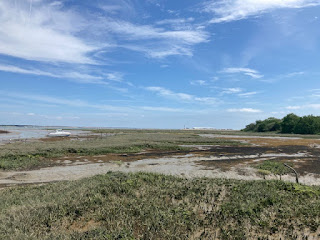 I find it adds a certain “frisson” to the occasion and the recent flurry of social events gave several opportunities for its implementation as regular visitors to this house will know, we haven’t really done anything over the past year other than keep our heads down emerging intermittently to shake a fist at an increasingly frustrating world.
Neither social occasion seemed the place to offload so we stuck to drinking vino and talking nonsense while trying not to offend.
I think we pulled it off, although the flurry of invitations has now dried up so I may have let myself down somewhere.
Posted by Test Valley River Keeper at 21:09

I'll be standing by an Italian lake at the weekend, nostalgic for the sweet perfume of decaying seaweed and diesel fumes. Garda's nice, but Mayflower Park in Southampton on an overcast Sunday afternoon it ain't.

Oh don"t Jon, are you fishing?

We saw Vendace in Maggiore, both in the lake and on the menu. At the last count there were only four Vendace left in the UK although this low number may be directly attributable to surveying technique and operator ability.

I sat in Mayflower Park all night once when we were at college, not in a Special Brew and bin rummage kind of way, but as part of college practical work experience with the NRA. I had to sit in a shelter and scan the water with a night sight for salmon poachers creeping up to Redbridge in small boats. There were a few of us scattered about Southampton Water and in a pre mobile phone age we were linked up by walkie talkies. I had been dropped off by the NRA rigid inflatable and had chest waders on as the plan was to move on up to the marshes around Redbridge. Around midnight I spotted a boat creeping past Mayflower Park and got straight on the walkie talkie to alert the team leader. Unfortunately the walkie talkie failed to function. In the event of such a failure we had been drilled to alert Southampton Police. The nearest phone was in the nearby Royal Pier nightclub and after a confusing conversation with the bouncers on the door I found myself in The Royal Pier nightclub in chest waders and life jacket with the party in full swing and the band playing strong, fielding all manner of questions regarding chest waders and what I wore beneath them.

Thanks for getting in touch and must touch base again sometime soon,