Wind, Conkers and a Triumph Dolomite 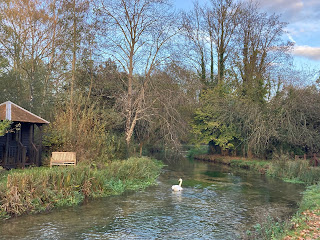 Hello,
still here.
Just been a bit busy that’s all, or should that read just been trying to keep myself a bit busy.
A few things have happened, most of which I have already forgotten.
Oh yes, the wind, that was it.
It’s blown quite hard a few times in the last month with trees various cashing in their chips. One Sunday evening before the clocks went back the valley was plagued by mini tornadoes. Some were caught on camera, ours went pictorially unrecorded, but for a few minutes the rain was going sideways outside our kitchen window and the sky assumed a spooky hue. 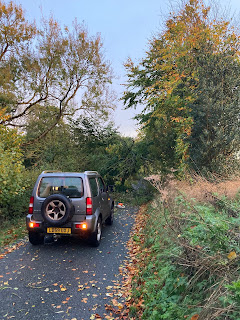 We had ash across the road, ash in the river and an old fruit tree fell across a Bransbury resident’s drive. The English’s extensive vegetable garden with high end raised beds was also smashed to pieces.
For many years the failed old fruit tree formed part of a ground breaking garden feature that included a maroon Triumph Dolomite beneath it’s boughs. An old boy called Bill Goddard lived at the residence at the time along with his donkey called Conkers. The fruit tree was fairly ancient and in the ten or so years that Bill and our time in Bransbury coincided, the Triumph Dolomite never moved once, he just strimmed around it once a fortnight.
The neighbour to Bill’s semi detached donkey and dolomite haven was a man of a similar vintage called Mac. They were both hard of hearing and if their choice of TV programme of an evening did not match up, volume wars would break out with various soaps turned up to eleven and easily audible on the south bank of the river. They also both enjoyed a drink, bursting into renditions of popular standards that included “That’s whisky that way” and “The old Wooden Cross” Bill was a lone wolf throughout the time I knew him although fearsome Mac’s paramour was a lady in the village called Win whose hair colour changed with the wind, Mac also had a very angry German Shepherd called Otto who I still have nightmares about. 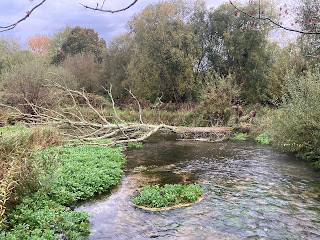 We’ve hoiked the ash out of the river and the ash on the road was dealt with in fading light much to the frustration of a member of local town society of a certain age. The Highway to the Sun was also affected by tree failure, said member was trying to get back to town and why had I chosen the last hour of the Sabbath to fell a tree onto the road and didn’t I know that Songs of Praise was on?
I informed him that we had experienced some unusual weather conditions in the last hour and assured him that I would be as quick as I could, he could always catch up on The Antiques Roadshow on Iplayer.
A fairly fit looking cove, who seemed to know nothing of Iplayer, he then sat in his car with steam coming out of his ears as I leisurely attended to the toppled timber in fast fading light.
I'm just guessing Sir, but I'd say you live alone.
Chainsawing in fading light by the way, not to be recommended, especially with a couple of glasses of wine on board and a belly full of roast beef and roast potatoes. I walked up the road in the morning to find I’d left a lot of gear behind following manoeuvres the previous evening including one pair of gloves, my chainsaw helmet and a five litre can of chain oil. 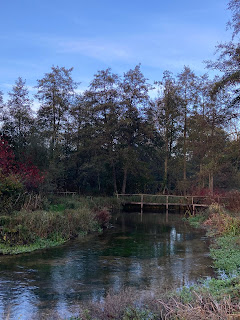 In other tree news, the same cyclone sent a substantial willow into the top pool on the Itchen. Immediately below the road bridge the flow is quite high, weed had been cut and it had all become a bit of a tangled mess. Careful approaches upstream were made in waders with chainsaw in hand and each cut limb floated downstream to a point where it could be pulled out with the Jimny. A steady job, I was joined halfway through by Pat, the keeper who looks after the opposite bank.
A welcome addition to the party as it is a tricky spot to be on your own and I am of an age.
As is always the case when keepers meet, chat develops.
Sans hearing aids (me not Pat, Pat doesn’t need them, although…) we waded into the middle of the river to stand on a gravel bar at the tail of the pool for increased conviviality and to reduce the number of times I was required to shout across the river “I can’t hear you Pat” Conversation ensued on a wide range of subjects from the "deep dish" to the nonsensical before our eye was drawn to movement on the bank. An Otter was bumbling it’s way along the fringe, it passed under the Jimny before sliding into the river. It then swam upstream gliding within six feet of us before fishing in the pool for a few minutes.
It knew we were there, I swear it winked at us as it passed but wary of us it most certainly wasn’t, a cocky fecker I’d suggest that it was an old juvenile/young adult. 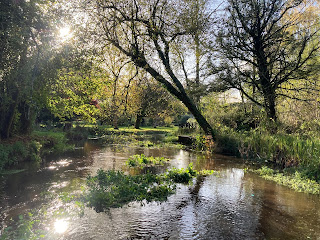 Wind has been accompanied by welcome rain in the last few weeks. It’s a good start to the winter and there has been enough flow to aid the shifting of the large banks of watercress that were allowed to grow in to pinch the flow in late summer. The task is normally aided by a few hard frosts which sap the watercress’s strength, but hard frosts have yet to materialise. Allowing watercress to grow out into the river inhibits other weed growth, so it is always good to get it gone when it’s usefulness has passed.
Attending to another fallen tree in the wood last week I was surrounded by head high nettles that are still hot and could also do with a hard frost to encourage them to wind their neck in. 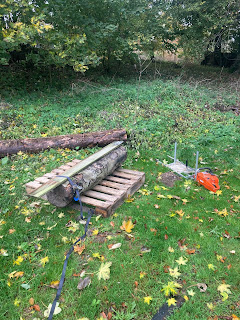 Done a bit of planking. Ash and Beech mostly for seats, benches and bridges. The beech was one that Lord Ludg and myself dragged up the road with the tractor around four years back. The ash came down the same summer in the wood.
In poultry news, the chooks are now holed up in a chicken run. 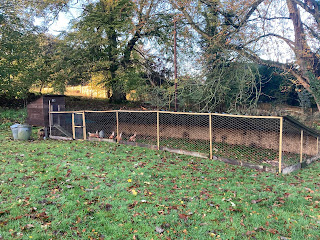 We like having them wander around the place, during the pandemic they acquired celebrity status and featured on several social media platforms as people paraded along the lane in the name of exercise and the chooks duly performed. Our island status affords us protection from some serious fish diseases that prevail on the continent, but island status affords us no protection from avian diseases and annual patterns of migration. I don’t like locking up the chooks, but it is a big run on grass and if it helps to minimise the impact of avian flu this winter then it seems the responsible thing to do,
that and we do like the eggs, and haven’t they got expensive of late?
I think that’s it, not much else to report regarding the future, other than the usual query about the development of Hover Shoes (Bleep and Booster assured us in the 1976 Blue Peter annual that we would all be wearing them by now) We currently have the odd rod arrive to bother grayling, and I am instructed to make preparation for another summer on the Dever at Bransbury, which would be great, but at the moment everything still feels a tad odd.
Posted by Test Valley River Keeper at 19:48