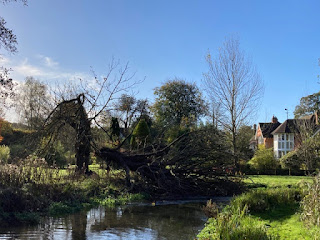 Well the wind blew hard the other Sunday and the mother of all horse chestnuts cashed in its chips.
Thirty years ago it had the perfect shape for a mature tree but several limbs had dropped since then and its figure had been seriously affected. But it still seemed reasonably healthy. Bizarrely it fell into the wind suggesting that it snapped in recoil after a particularly strong blow.
It has taken the best part of a week to sort out with the many large limbs having to be hauled from the river with the tractor. The wind also did for three large ash trees which drew Lord Ludg and The English from their burrows, fallen ash acts like a magnet to these two. 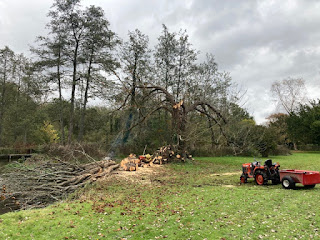 We also felled a large self set aspen.
A fast growing tree it was beginning to loom over my employer’s house so it had to go. A rope was slung around it’s middle half way up and the tractor applied pressure to stop it falling into my employer’s bedroom as I delivered the final cut. This method has occasionally misfired in the past over calculations regarding length of rope used, but no one has been hurt yet, although Lord Ludg was tickled up by the top of a substantial Christmas tree a few years back when playing the role of tractor driver. 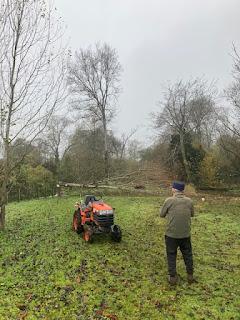 Command Centre Central turned up to conduct a survey of the river via the medium of electro fishing. It was initially due to be undertaken in the spring of 2020 but that went the way of the pando. 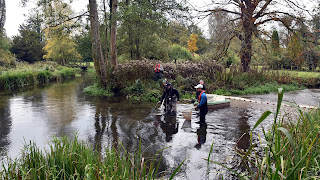 The bottom section revealed a lot of big triploid trout that are being introduced to the river somewhere down stream and move up to this stretch through the winter. It has been a regular occurrence during the last three winters, a big noise from Command Centre Central fishes here each winter for grayling and had noticed their appearance and was one of the reasons that the survey was undertaken to see if the big Trips were impacting upon native fish populations.
We await their conclusions. 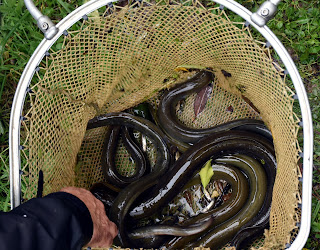 The top shallows were also surveyed where over eighty brown trout to a pound and a bit were caught.  The number of eels that were caught both yellow and silver was also a surprise and quite encouraging.
The elephant in the room throughout the survey was the lack of grayling.
In the seventies and eighties grayling were considered a bit of a nuisance in the southern chalkstreams. If it wasn’t a trout it was coming out and each autumn thousands of grayling along with pike, perch, roach and chub would be removed from this river. Any trout angler who caught a grayling was encouraged deliver the coup de gras. Yet each year the number of grayling remained fairly constant. 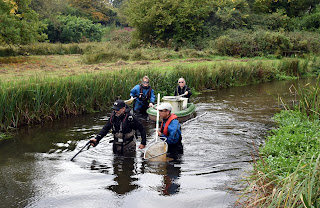 If you went through this river with electric probes this autumn to remove grayling, the population would probably crash or at the very least take a long time to recover.
Cormorants have undoubtedly impacted on their numbers in the middle river, anglers no longer bang them on the head. Grayling did spawn on the shallows in front of the fishing hut in early spring this year but not in numbers seen just ten years ago (there’s a video on the “tube called you” somewhere)
In 2015 following lengthy consultation the flawed National Trout and Grayling Strategy was implemented.
Management of the chalk stream habitat in the seventies and eighties is often criticised for being too “trout centric” as I stated previously, if it wasn’t a trout it was coming out.
Since the implementation of the National Trout and Grayling Strategy in 2015, we have seen a return to "trout centricity" the grayling is very much the junior partner. They can both thrive in a chalk stream habitat and yes both are salmonids, but the fact that one spawns in early winter and the other in early spring sets them apart and that isn’t being taken into account with regard to management of chalk streams.
Winter fishing for grayling on chalk streams has increased year on year during my time falling in and out of this river. People now pay a lot of money and drive a long way to fish for the “lady of the stream” as they don’t exist in rivers countrywide. I had never seen one until I moved to this valley in 1986, let alone caught one, in my formative years it was a mythical creature.
Every angler who fishes for grayling in this valley is a stakeholder in the chalk streams and has an interest in the condition of their habitat. 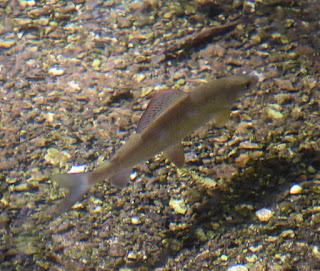 If the grayling population declines to the extent that it is not worth fishing for them, the number of stakeholders with an interest of keeping chalk streams healthy is reduced.
Ten years ago people paid money and travelled many miles to fish for roach in this stretch of the river, The late great John Wilson wrote an article for Anglers Mail on the fish he caught here, Keith Arthur turned up in his van with Sky TV crew in tow to film a piece on fishing for the large roach.
The roach have gone now, last week’s survey turned up no red fins. The roach fishermen no longer come and articles on their capture no longer appear in Anglers Mail or features on Sky TV, the number of stakeholders with an interest in looking after chalk streams has subsequently been reduced.
The roach disappeared in the space of five years, We need to start looking after the grayling. 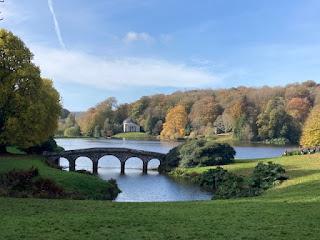 Popped up to Stourhead last week by way of lengthening life via the medium of left foot right foot. Didn’t do the house but walked down the valley where Peter’s pump is located that used to be the source of the Stour. The source is much further down the valley now, at which point I could get cross about the chronic decline of groundwater levels and how this corner of the country is increasingly “drying out”
But I won’t as it was a lovely day, with a picnic by the lake and the trees approaching “full fall”. There were a lot of people about and Moss covered most of Wiltshire in earnest pursuit of a twelve month old GSP for about ten minutes. 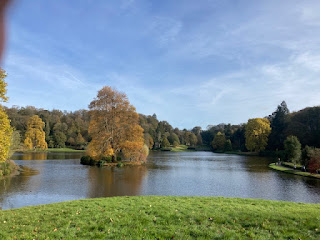 I thought I’d been to Stourhead before. I’d been asked to produce some artistic willow arbors in the garden of Peter Brooke MP and had paused by a lake that I thought was Stourhead for a cup of coffee.
Turns out it wasn’t as I had no recollection of the lake we visited last Sunday. The quest for the lake that I took coffee by now begins, as it was a very pretty “Estate Lake”
Peter Brooke and his wife were good fun and kept the coffee and cake coming as I chucked up poorly constructed willow structures in their immaculate garden. The conversation turned to cricket, and he took me into his study, which was a small tower like structure on the end of the house and the stuff of Dumbledore. He was a couple of copies short of a complete set of wisdens. I mentioned that I knew John Woodcock fished at Bransbury and he had the full set and that was that, cricket chat was far more important than poorly constructed willow structures in the garden and I had to return a few days later to complete the installation (artistic parlance I believe) as the first afternoon was lost to examining a large collection of cricketing memorabilia. 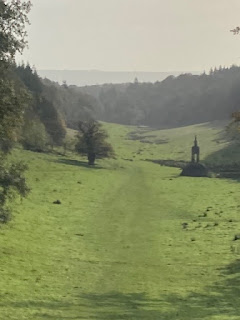 While we’re on all things MP.
It is welcome that some form of legislation has been pushed through to hold the water companies to account and public awareness has been raised regarding the issue of raw sewage being sent down the precious river systems of these Isles, but much more needs to be done to hold the feet of these weasels that are water companies to the flame. Treated water needs to be of a higher standard and the range of testing increased to cover more parameters that may be impacting upon the aquatic environment. Investment in infrastructure needs to be increased and dividends dished out reduced.
Once again fly tipping get a mention, here's one of the latest piece of furniture to be introduced to the parish complete with packaging. 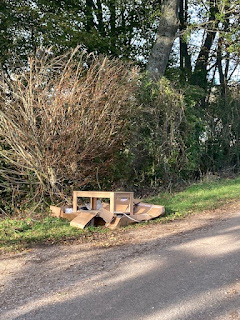 Today's Thunderer featured another article on the ageing minds of the over 50s during the Pando,  with which I would concur.  You will remember talk of Brain Fug on here and an inability to get going with written guff.  Research is now being undertaken into this cognitive decline for this age group and I would like to offer myself up as a Guinea Pig if anyone out there needs one.  Ten years ago I could sit down after tea bang out my 850 word column for The Shooting Times, write a 1500 - 200 word Feature Article on some obscure rural subject for the same publication, write a couple of football match reports for the local paper, throw together a newsletter for the cricket club and still have time for a glass of wine with Madam before climb climbing the sunshine mountain to our bed in the sky following the News.
I'd struggle to do that today after the last twenty months.  Ok I accept that a chronic physical decline sets in with time, behind this slipped chest and withered husk lie the last vestiges of a once great beauty, but I didn't expect befuddlement and inertia to take hold quite so quickly once I pitched into my fifties in a pando.
Posted by Test Valley River Keeper at 19:38

Such a shame that the health of grayling stocks isn't what it once was, but like anywhere, could it recover well enough to be prolific once again and in the case of the Roach could they re-populate the river? Such a shame I didn't get on there a couple of years earlier, I never managed a 2lb specimen but saw plenty in my first couple of years.

Like most good things, they must come to an end.

However, we have had some lovely "ladies" out over the last couple of trips, so they do still exist, just probably not in the numbers we all hope for.

Still, it's a wonderful place to forget about the world for just one day.