The Uxbridge Berlusconi and a Messy Incident on Fulham High St. 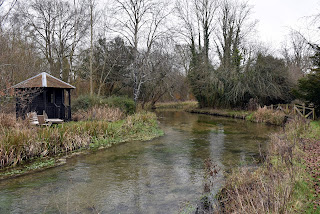 Happy New Year everyone,
Did we do that one yet?
Well January seems to have flown by, most of it with chainsaw in hand. Ash mostly with the odd field maple but for much of this week whacking into willow. In these parts willow had a good time of it in 2021. Some limbs have put on eight feet of growth and with leaf weight in spring will drop a few feet from their current position, impeding paths, banks and a cast at a rising fish.
We could do with some rain. Flow from springs is fairly feeble and the river is running clear. A wet couple of months would be of great benefit to the chalk rivers in the south.
Grayling fishing has picked up. Through Autumn and early winter the morning was the more productive time, but recent anglers have enjoyed more sport in the afternoon with several fish taken off the top while sipping at the occasional olive.
A new electric utility vehicle has been purloined and it sits proudly in its own garage behind heavy security. The back section has a tail gate and a tipping facility increasing its usefulness further.
Used in conjunction with the tractor, carbon neutrality is achieved by the healthy batteries offsetting the fumes from the Kubota and the occasional puffing of the operator on a pipe. 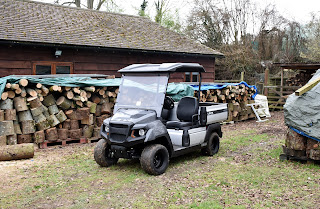 I think that’s how carbon neutrality is attained, particularly if you are cutting trees down and furiously replanting at the same time.
It is tremendous to see the plight of the UK's rivers finally being raised to a higher level in the media and in parliament, and the weasels at the water companies being called out for poor practice and a failure to invest in infrastructure. Keep it up,  action has been required for decades, and it hardly got a mention fifteen or so years ago.
Should have been in Cork last weekend to see ‘The Dara” warming up for his forthcoming stand up tour. Unfortunately the whole thing was cancelled. We were due to fly over on Saturday morning, returning on the Sunday evening. Unfortunately entry into Ireland requires two days of quarantine, Carol Vorderman teaches us that this is not possible in the given time frame.
The show was cancelled a few weeks ago and rescheduled for a midweek night in March, which as Madam works in education, we are unable to attend. Everything was refunded but it would have been nice to be back in Ireland. 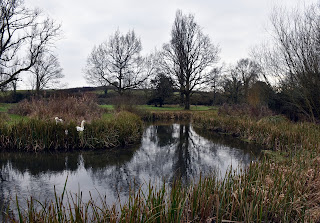 Instead we headed for the smoke, because somehow Child B is now 27 years old.
And I’ll break off there.
The flights we had been due to take to Cork came in at a smidge over seventy pounds each.
Before the Pando struck, Madam and myself had taken out a railcard in order to ride the rails a little more by way of saving the planet. The railcard lapsed during the Pando and a new one was taken out last week in order to catch the train from Basingstoke to Clapham Junction, a rail distance of around 42 miles. Off peak tickets for the journey mid Saturday morning returning mid afternoon came in at sixty pounds each without the railcard, forty pounds each with the railcard. The last time we headed up to the City (pre Pando) we paid twenty and a bit pounds with the railcard.
Once again our flights to Cork, a distance of 350 miles cost seventy pounds each.
???? 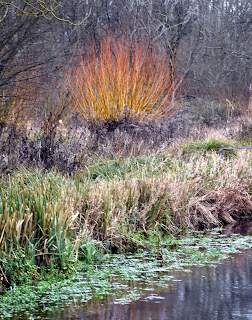 So we drove to London
What we are told is our oil burning pig of a two litre diesel BMW, eats up motorways at just under fifty miles to the gallon and costs only thirty pounds to tax each year. Ok it was fifteen pounds to park the thing for the duration and I had to suffer the lecture by the recorded message on the Ringo parking party line as to why the “oil burning pig” was so expensive to park in the district, but with financial hardship on the horizon for many, other than walking, or risking everything on a bike, it remains the most cost effective, if not the cleanest way of entering what some would have as one of the greatest cities on earth. 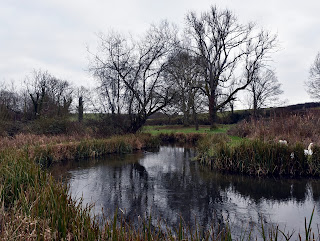 The environmental platitudes issued in Cornwall many months ago seem a little ingenuine, but hey, they got some good photos.
Which seems symptomatic of the times we live in, with “Our Great Leader” the Uxbridge Berulsconi channelling the Sun King or possibly Louis XVI with Carrie Antoinette imploring all present to eat cake while the court continue to mug the rest of us off.
Ho hum, we are where we are, 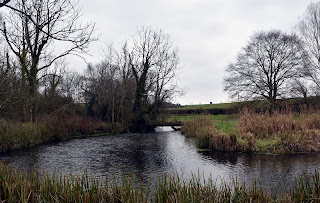 Anyway we went to London and an excellent lunch.
Later Moss drew quite an audience as his bowels, brim full of urban excitement and some odd sausage that rolled his way in the restaurant, let him down spectacularly on Fulham High St. An extensive clean up operation swung into action which included several trips into a pub for jugs of water, and many “pooh” bags and tissues.
In conversation I lied about my age once again. It’s not a vanity thing, I’m quite happy to be the age I am, it’s just that with the madness of recent times I find it difficult to remember what year we are currently in and how old I actually am. Physically and possibly mentally, two years of pandemic has put five years or more on many people (me included) yet I continue to unintentionally knock them off when it comes to direct questioning on my specific age. 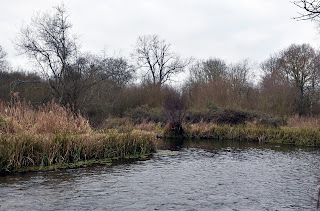 Looking up, we’ve a couple of trips booked for the coming year, which is exciting, but arranged to fit in with school holidays, weed cuts and Child A’s wedding.
I don’t think I have mentioned it on here yet but with limited availability, Child A and her intended are having to hold the event on a Friday in August in a big tent by the river. A good friend of mine, Mr Mole died last year, (or was it the one before that?) He fished here many times. He held his own wedding reception at home, and during the celebration the milkman arrived with the monthly bill.
A convivial cove, Mr Mole invited the milkman in, where he stayed for many hours and even appeared in the wedding photographs, bill in hand.
Friday rods, and I know a few of you read this rubbish, may want to have a hair cut and dig out your best weskit early August, as you may be having a camera pointed in your direction and be required to engage in non fishing based conversation with slightly squiffy people in suits and dresses.
That, or we’ll swap your day for a Saturday or Sunday.
Posted by Test Valley River Keeper at 19:59